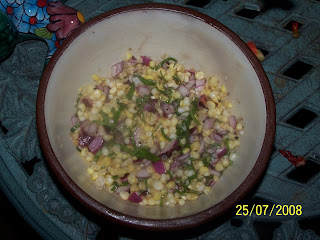 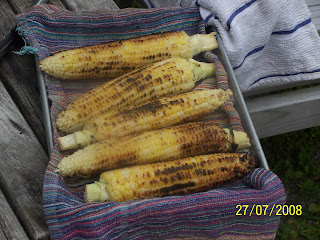 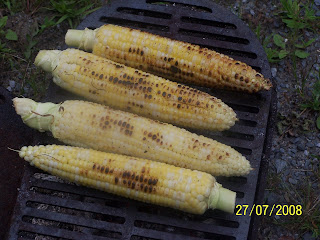 This is the start of one of summer’s most anticipated and enjoyed seasons, that of sweet corn. It’s a season that isn’t as transient as some local fruits and vegetables, like asparagus or strawberries or English peas. It lasts from late July until frost, sometime in late October, if we’re lucky. The longer the season, the sweeter the corn, so let’s all get ready (as I know you already are) for some fun eating over the next few months.

Now corn is a big subject, and the sweet corn story is only a small part of the big picture. I am not going to discuss the damage corn has done to the American health and waistline today as that is a matter for future writings. Suffice it to say, the US farm policy dealing the production of corn in this country is a travesty that, while it perhaps had some good intentions, has resulted in failed policies that have perpetuated a culture of obesity, diabetes and heart disease amongst a large portion of our population, to say nothing of the environmental damage it’s growth has caused, the rise of the corporate genetically-modified seed companies that it has spawned, and the enslaving of the farmer to those seed producers whose primary motivation is pure profit, not the betterment of mankind, despite their advertising to the contrary. This discussion, exacerbated today by the use of corn-based fuels in the form of ethanol, will have to wait until the growing and eating season is behind us, snow covers our landscape, and we have more time for reflection.

Throughout the world, what we call corn is known as maize, a derivative of its Latin name, Zea mays. There are 5 major categories of corn, with each kind distinguished by a different composition of their endosperm, the hard outer surface of the corn kernel. Maize originated in the Central American region known as Mesoamerica, and once discovered by the Spaniards in their late 15th and early 16th century excursions to the west, spread throughout the rest of the world. It is theorized that maize developed from the teosinte plant, Zea mexicana, a large grass that grows in open woodlands and savannahs and was domesticated in Mexico. As the third largest human food crop in the world, behind wheat and rice, it is vital to many cultures for their survival. In this country, more corn is fed to livestock than to humans, although its proliferation as a food additive, primarily in the form of high fructose corn syrup, has had significant impact by its inclusion in so many American food products,

While it is thought that the high-protein popcorn type corn was first domesticated, all five types of corn seem to have been indigenous to the western hemisphere. Along with flint corn, popcorn consists of large amount of storage protein surrounded by granules of starch. Dent corn, what we know as “cow corn,” has a “waxy” starch at the crown of the kernel. This produces its namesake depression, or “dent” in the dried kernel. Dent corn is the most commonly used feed corn, but is also used for ground corn products like corn meal, polenta, grits and some corn flours. Blue corn, better known in the Southwest, is the best known of the flour corns, and is easily ground due to its soft endosperm, which contains more starch than protein. And last is our sweet corn, which has a wrinkled, sugary endosperm that contains more sugar than starch and is eaten while immature. Indian corn is a flour or flint variety, and is used primarily as a fall decoration with little use as a foodstuff.

The early corn now appearing at farm stands and farmers’ markets is almost exclusively yellow in color, although bi-color varieties like “Sugar and Gold” or “Butter and Sugar” will become the standard in a few short weeks. Later in the summer, after the dog days of August, the sublime white varieties like Silver Queen will make their appearance and signal that the beginning of the end of the sweet corn season is approaching.

The longer the corn grows and the hotter the weather, the sweeter the corn gets. Early varieties excite our imagination as we recall the delicious nectar we enjoyed last fall, however they tend to disappoint us if just boiled or steamed and slathered with sweet butter, salt and pepper, as their sugars are not yet fully developed. Better to wait till later in the season to enjoy them this way, although I have a couple of early season cooking methods that I utilize to enhance the corn’s natural flavors.

First, I like to grill my corn whether early in the season, mid-season and late season. There are many methods one can employ to grill corn, but I only use the “husk it and grill it” method. Half husking the corn, soaking the ears in water before grilling, or wrapping in aluminum foil methods do not work for me. The key to enjoying early season grilled corn is to caramelize those sugars that are contained in the corn’s endosperm. The caramelization of these sugars, if not carried out to extreme, causes these sugars to start to break apart, releasing a cascade of chemical reactions that add a new variety of flavor points including “buttery” and “milky” and “fruity” and “flowery.” Relatively bland early season corn becomes memorable, and an apt precursor for a summer season full of rich, sweet corn flavor.

Get your grill going and preheated. Husk the corn just like you were going to boil or steam it. I don’t lubricate it with oil or anything else. I just place it on the preheated grill naked. Within a few minutes, turn the corn to see if it has started to brown. It won’t turn color uniformly, so don’t be concerned about that. Keep turning every few minutes until it is getting a deep, rich brown, not black, all over. If you overcook it and start hearing the kernels start to pop or sputter, you’ve gone a little too far, but try the corn anyways as you’ll be surprised at how sweet it becomes, even if quite dark. I remove my corn to a towel lined plate, cover it to keep it warm, and rush it to the picnic table, where I have fresh unsalted creamery butter, and my salt and pepper grinders standing by. Everyone digs in, and conversation takes a temporary backseat while the first ears are consumed.

Another fresh corn recipe we like that works pretty well with early season corn is a simple corn salad. Perfect for a picnic, this salad can be served chilled or at room temperature.

Bring a large pot of water to a boil, salt it, and simmer the husked corn for 3 minutes to remove the starchiness and just cook it through. Immediately remove the ears and place in a bowl of cold or iced water to stop the cooking and set the color. When the ears are cool, remove them and slice the kernels off the cob.

Mix the corn with the red onion and dress with the cider vinegar, olive oil, salt and pepper. Chiffonade the basil at the last second and add to the salad when ready to serve. If the salad lacks sweetness, I add a tablespoon or so of maple syrup, but take care to not to overdo it or the syrup will predominate.

There are lots more uses for fresh corn, and there will be future columns to discuss additional corn based recipes you can enjoy this summer.
Posted by Horace Palmer, III at 7:04 AM