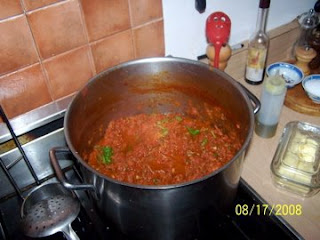 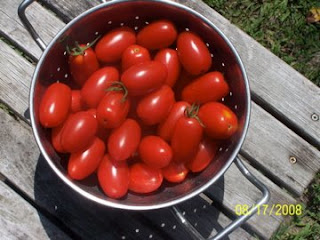 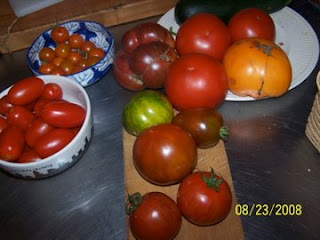 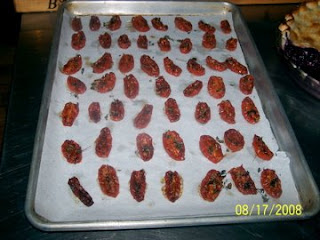 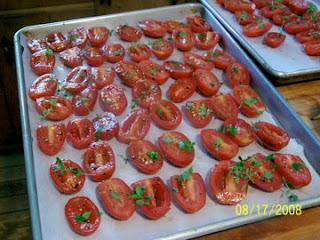 The tomato season is upon us and a large variety of different fruits are appearing in farmers’ markets and at farm stands. Perhaps you grow some tomatoes at home, as we do, so you can enjoy vine-ripened fruit from now until frost. The little cherry tomatoes were the first to ripen at our house, but now some of the plum tomatoes, like Roma and San Marzano are starting to turn red, and the Brandywines and beefsteaks are taking on some color. We also grow Cherokee Purple, a heirloom variety with a distinctive coloration.

The tomato plant is native to the western hemisphere, probably originating in South America or Mexico. The Spanish discovered the plant in the 16th century and brought it to Europe where it quickly became grown in the Mediterranean areas. Originally thought to be poisonous, it was used as a tabletop decoration, before being adopted for its culinary uses, perhaps as late as the 1700s. Today we hardly think of Italian or Spanish cuisine without the ubiquitous tomato, and its many uses have made it a staple in a large number of households. Thomas Jefferson brought tomato seeds home from Paris and helped to popularize the tomato in America. Today tomato production is dominated by the Chinese, which produces about 25% of global output, although the US is the second largest producer, followed by Turkey.

The tomato plant, solanum lycopersicum, is a perennial plant grown as an annual. It is a member of the nightshade family, Solanaceae, and is related to the tobacco plant, the eggplant, chili peppers and the potato. Strictly speaking, the tomato itself is a fruit, being the ovary of the tomato plant complete with seeds. In actuality, the tomato is a berry of the flowering plant, but is it generally known as a vegetable. Most fruits are sweet in taste and used more as a dessert, however the tomato is more acidic and used as part of an entrée or salad. In the science of botany there is no “vegetable” species, as this is purely a culinary term. The tomato is the state vegetable in New Jersey, and I must say that when I shopped at the Union Square Greenmarket in New York, the Jersey tomatoes were unequalled in their variety of shapes, sizes, colors and taste.

Recently tomatoes have been in the news as they were the source of a salmonella outbreak a few months ago, sickening people across the country, including in Vermont and New Hampshire. The hapless Food and Drug Administration was unable to detect the source of this poisoning for many months, and now they think it originated in Mexico with some jalapeno peppers. The point being that the food chain in this country is suspect, with products coming from so many producers worldwide that the government has lost any control it once had, and you should stick to eating locally grown foods not only for their superior flavor, but also for food safety reasons. If you buy a local tomato and get sick, you know where it came from and can return to the source. Buy one in the supermarket and you don’t have a clue as to its origin, and neither does the supermarket manager.

The tomato is rich in vitamin C and the red varieties, particularly in tomato ketchup and tomato paste, include a powerful antioxidant, carotenoid lycopene. It is little known that the leaf of the tomato, long thought to be toxic because it contains a defensive alkaloid, tomatine, can be added to a tomato sauce near the end of cooking to restore its fresh flavors that are lost during the cooking process. The tomatine actually binds with cholesterol in our digestive system, preventing the absorption of the toxic alkaloid and the cholesterol. So this practice of using some tomato leaf to freshen your sauce includes a health benefit as well as being a taste enhancer! Who knew?

Tomatoes purchased in a store are picked green and artificially ripened with ethylene gas, a hydrocarbon gas given off by fruit. Tomatoes ripened this way tend to last longer, but they have inferior flavor, and are starchier and mealier than those ripened on the vine. Vine ripened tomatoes accumulate more sugar, acid and aroma compounds, thus they have more flavor. Most commercial growers are primarily interested in tomatoes that are disease and pest resistant, cracking resistant, fast growing and uniform in size. Taste takes a back seat, and commercial growers prefer hybrid varieties that are produced by genetically modifying the seed or crossing with other varieties to enhance one characteristic, like uniformity of size or pest resistance. Most hybrids will not produce a seed that will duplicate its parent, so the commercial grower is dependent upon the seed producer for each year’s crop. Recently there has been a resurgence of the heirloom or heritage tomato amongst home and organic gardeners due to their better flavor and more interesting shapes and colors, albeit at the risk of less disease or pest resistance.

Tomatoes should not be refrigerated! As soon as a tomato is chilled to 55 degrees or below they suffer damage to their membranes that dissipate their flavor, result in a blotchy, unappetizing appearance, and damage to their texture. Bringing them back to room temperature will not reverse this process, so please store them outside your refrigerator. If you’ve picked them slightly under ripe, store them in a paper bag as they ripen best in the dark. If the tomato is fully ripe, you can refrigerate it, but you won’t be doing it or its future eaters any favors.

Fresh local heirloom tomatoes are plentiful now. While we are fortunate to have access to Longwind Farm in East Thetford, where fresh organic tomatoes are produced about 10 months of the year, we eat primarily canned tomatoes during the non-summer months. I like the San Marzano canned tomatoes for tomato sauce, but also find Hunt’s Whole tomatoes an acceptable alternative. I strictly avoid all crushed canned tomatoes, finding them overly acidic, and only buy whole canned tomatoes. I like to crush them up myself after they’ve cooked for a while, and I usually use my potato masher, rather than my food mill, as we like our sauce a little chunky, whether for pasta, in an eggplant parmesan or in soup or stew. A pot roast or winter beef stew always get a can of whole tomatoes at my house, and, of course, anything cooked with tomatoes improves with an overnight aging in the refrigerator.

Today I’m making a large pot of fresh tomato sauce from a boxful of organic seconds Rosemary brought home from Cedar Circle Farm in East Thetford. There are probably a half a dozen types of tomatoes including a black-purple heirloom type, some plum tomatoes and some beefsteaks. I’ll sauté some local onions and garlic from our garden before adding shredded carrots grown at Your Farm in Fairlee (for their natural sweetness). Before I dump in the tomatoes, which I have peeled and seeded, I’ll add some fresh thyme, and then cook these tomatoes down to a thick sauce for tonight’s supper. Just before serving, I’ll add some fresh basil leaves.

I also bought some little plum tomatoes from Craig Putnam of Echo Hill Farm in Orford, and I’m drying them in a low (200 degrees) oven on sheet pans until fully desiccated. These tomatoes I’ve sliced lengthwise and tossed with olive oil, salt, pepper and a little sugar. I’ve sprinkled them with fresh thyme and arranged them cut side up on parchment paper. It will take 6 to 8 hours to fully dry them out. You could use a dehydrator, but I prefer my oven. I’ll store these oven-dried tomatoes in a jar with olive oil and garlic slices and a few basil leaves for use later on.
Posted by Horace Palmer, III at 9:05 AM