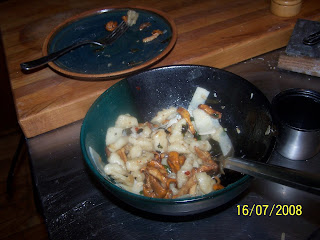 My son, Asa, was home last week for a few days and, while walking his dog in the woods behind our house, he came upon some little treasurers, wild mushrooms. Over the years we have studied up on local wild mushrooms and have discovered at least three different kinds that we forage for and eat. The Montshire Museum of Science in Norwich had a mycology course on locally available mushrooms a few years ago which I did not attend, and I have watched to see if they would repeat it, but alas, not to date, to my knowledge. I’d jump at a chance to go out with an expert.

When I was growing up in the 1960s, I knew a local Italian family that gathered mushrooms, although only one kind, I think, and after slicing them lengthwise, dried them in the sun on screens for use in the winter. This was my first introduction to locally available wild mushrooms.

Of course, we all know that some mushrooms are poisonous and can either make you ill or even kill you, but there are lot of them that are called inedible, which more often then not means they don’t taste good, not that they are necessarily poisonous. If you want to forage for mushrooms, you have to be very careful and have a good knowledge of what you are doing. It’s good to know someone who has some experience before plunging in on your own.

We have three or four books on the subject of mushrooms, including the Audubon Society’s Field Guide to North American Mushrooms, and my favorite, The Complete Mushroom Book, The quiet hunt by Antonio Carluccio. Our friend Joann from Barnet introduced us to the “field mushroom,” agaricus campestris, while we were doing tai chi on the Memorial Field in Bradford one day a few years ago. It had rained the night before, and by late morning these mushrooms spotted the eastern side of Memorial Field in clusters. We picked about a dozen and eagerly took them home to cook.

Walking in our neighborhood, we have come upon the distinctive black morel, morchella elata, with its pock marked cap and sponge-like appearance, growing in sandy soil. These are quickly gathered (we can’t believe our lucky stars) and sped home for a quick snack. I usually just sauté them quickly in olive oil, with a single minced clove of garlic, perhaps a snippet of fresh thyme and/or parsley, and a grinding of salt and pepper. Serve on bruschetta, toasted baguette rubbed with garlic and brushed with extra-virgin olive oil, or toss with some pasta. Yummy!

What Asa found, however, was the beautiful chanterelle, Latin name cantharellus cibarius. This mycorrhizal fungus, meaning it forms symbiotic relationships with other plants, is nearly impossible to cultivate, but is relatively common hereabouts in the wild. While caution is always the by word, this golden colored, gracefully funnel-shaped mushroom smells mildly of apricot and is easily recognizable. The gills on the underside have irregular veins running from the bottom of the cap to almost the base of the stem. The flesh is firm and meaty, and it has a light peppery taste. In France they are known as girolles.

After bringing them home, he carefully cleaned the dirt off with a brush. Some say you can wash mushrooms without their absorbing any water, but we prefer to just clean them with a soft vegetable brush before we slice them up.

Asa loves to make gnocchi, the little dumplings made with potato and flour, in his recipe, but, in mine, an egg is included. So he decided to pair his chanterelles with potato gnocchi and some gratings of cheese. Good idea, I thought.

Gnocchi are made from a variety of different ingredients including potato, semolina, ordinary wheat flour and bread crumbs. Once made, some varieties are rolled into a distinctive shape on the back of the tines of a fork with ridges on one side and a depression on the other so the sauce has somewhere to adhere. Some Roman-style gnocchi are made with semolina flour cooked like polenta in water, cooled and cut out into circles or disks before being sauced and often baked in the oven. Asa makes potato gnocchi and boils them in a large pot of water until they bob to the top. He removes them with a skimmer and, if not being served right away, he places them in cold water to arrest the cooking. In a few minutes, he drains them on paper towels, and in an hour or so, places them in freezer bags and puts into the icebox. Next time he’s home, he just boils them a few minutes to thaw out, and sauces them for a quick snack.

Potato Gnocchi with Chanterelles (or mushroom of your choice). Serves 4

Boil the potatoes in their skins in plenty of water, salted, until they are done, but before their skins break open. Remove from the water and let cool until you can handle them, or put on gloves to peel them sooner. Remove the skins and put the potatoes through a ricer, spreading the fluffy potatoes over a sheet pan and allowing them to cool completely.

Beat the egg with the seasonings in a small bowl, gather the cold potatoes into a mound with a well in the center. Mix the egg into the potatoes and start incorporating the flour until you have a smooth, but slightly sticky, dough. Don’t overwork it or the gnocchi will be heavy, not light and airy. Flour the work surface, and divide the dough into manageable pieces, about 2 or 3. Roll out each piece of dough using a smooth back and forth motion until you have a snake about 3/4’ in diameter. Use your dough scraper to cut the rope of dough into ½” pieces. Sprinkle with flour and roll each piece quickly into a small round. To make the ridges, each piece will be rolled across the back of the tines of a fork, pressing them with the tip of the thumb, which makes a dimple on the gnocchi’s backside. Place on a floured surface while the water is coming to a boil.

Heat the olive oil in a skillet sufficiently large to be able to accommodate all the mushrooms in a single layer. Add the onions when the oil is hot, and sauté over medium heat until soft and just starting to color, about 8 to 10 minutes. Add the mushrooms and raise the heat to medium high, tossing the mushrooms, coating with the oil. Saute them until they release their liquid, stirring or tossing occasionally. In about 5 minutes, add the thyme and a sprinkling of cinnamon, and swirl to combine. Cook a minute or so more and add the parsley, salt and pepper.

Put the gnocchi in the boiling water and cook for a moment when they come to the surface. Be careful not to let the water come to a violent boil or your gnocchi will suffer. Drain with a skimmer and place in the skillet with the mushrooms. Toss lightly, sprinkle in the grated cheese, and serve warm.
Posted by Horace Palmer, III at 8:12 PM