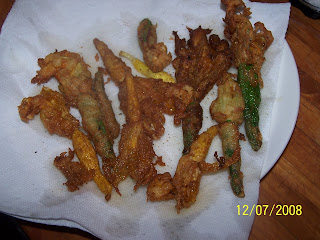 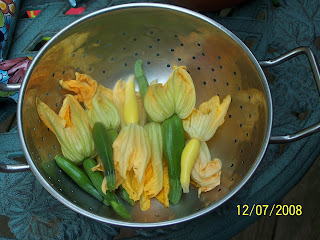 I hardly know a backyard gardener that doesn’t grow the summer squashes; zucchini and/or yellow crooked neck squash. Many also grow winter squash like Hubbard, acorn, butternut or buttercup, as well a pumpkin. I’ll write about winter squash when we get to the fall season, but the winter squash in your garden have application in the subject of this article, also. Today we’re talking about the delights of preparing squash flowers for your supper table or as an appetizer. I don’t know how many locals indulge in eating squash flowers, so this may be new to many of you, but it’s not a subject to be dismissed lightly as it’s a unique food, readily available, and not only fun to prepare, but delicious to eat.

Squash flowers are available in farmers’ markets in the area and have started to appear in recent weeks. A few years ago they were a complete novelty, but more and more people are buying them today, so more and more vegetable growers are finding there’s extra income on their squash vines. If you have any of the summer or winter squashes mentioned above, you have the makings of a unique meal or appetizer growing in your yard.

Now at our house, we pick our zucchini in their infancy. I mean very small, usually with the flower still attached, and, therefore, very often. We all know what happens when you neglect your zucchini plant for a few days: gigantic zucchini zonkers sprout and you have a new whiffle-ball bat. These massive squash can be made into zucchini bread, perhaps, but most end up in the compost heap once the kids get done having fun with them.

Zucchini, also known as courgettes, are referred to as vegetables, but are actually the immature fruit of the plant, being the swollen ovary of the female zucchini flower. If you look at your plants closely, you will note that there are two flowers on your plants. The one on a long stem alone is the male flower. These male flowers are the ones most often picked for blossom dishes, however, if you pick your zucchini small enough, you can also include baby zucchini with the flowers attached, as I did recently.

The flowers open during the evening hours to catch the dew that falls, so it is best to harvest them relatively early in the morning. Later in the day, the flowers close up (watch out that you don’t bring one in with a bee enclosed), and as they are so delicate, they are harder to handle if you intend to stuff them. If you are just frying them in a light tempura batter, the closed flowers are OK to use.

Zucchini flowers (including yellow crooked neck flowers, both male and female, as well as male flowers from all the winter squashes) are very perishable and should be used the same day they are harvested. They won’t last long, even refrigerated, so plan on cooking them separately, or including them in a frittata, or risotto, or as a garnish for a light summer soup. They have a very delicate, almost ethereal taste, so it’s easy to overpower them if you’re not careful. I once stuffed them with fresh mozzarella and anchovy, before roasting, but felt the anchovy was too strong for this application. In many areas of Italy, where they are common in the weekly marketplace, they are stuffed with all sorts of things, from prosciutto to potatoes to greens, often with cheese.

We usually eat them deep-fried in a light batter of flour, egg and salt. Deep-frying is somewhat of an art unto it self, so let’s just cover some of the basics for those that need a review. First, make sure all the ingredients are dry, as moisture and hot fat don’t mix. Splattering will occur, so be sure you use a sufficiently large pot to hold the oil to prevent injury or, heaven forbid, fire. Use fresh oil and plenty of it. Peanut oil has the highest smoke point, but regular vegetable oil is fine as we’re talking 360-375 degrees as the optimal frying temperature. Use a deep fry thermometer to monitor the oil’s temperature as oil that is too cold will result in soggy, oil laden food, and too hot will burn the food or overcook the outside while leaving the center undercooked. Don’t overcrowd the pan or the oil’s temperature will be reduced when food is added and the results will be oil saturated and unsatisfactory. When using a batter, dip the food to be prepared in the batter at the last moment, allowing any excess to fall away before carefully placing the food in the hot oil. Lay the food into the oil gently so as not to splash any on yourself. Or use a fry basket if you have one. Remove the cooked food with a spider or slotted spoon, allowing the excess oil to fall away before placing on absorbent paper towels to drain. Salt the food while it is still warm, and serve immediately.

For four people as a summer appetizer here’s a recipe for Fritto Fiori di Zucca, Deep-fried Zucchini Flowers (you can also include the baby females with the little zucchini attached, if you have them):

Make a batter in a medium-sized bowl by whisking together the water and beer, slowly adding the flour and whisking until smooth. It will be fairly thick, so set it aside for an hour to allow the flour granules to become fully hydrated. After an hour, and just before you are prepared to batter the flowers and cook them, whisk the egg whites until stiff, but not dry, and using a spatula, fold the egg whites into the beer batter.

Pour the oil into a wide 6 quart saucepan, or use a deep fryer if you have one. The oil should be at least 2” deep. Use a deep-fry thermometer and preheat the oil to 375 degrees (190 C).

When the oil is hot, gently dredge the zucchini flowers in the batter, rolling them around to evenly coat them, and allowing any excess to drip back into the bowl. Carefully place the battered flowers into the oil, a few at a time, being careful not to overcrowd the pan. Fry about 2 minutes total, turning the flowers over after a minute so all sides are golden brown. Remove with a wire skimmer, drain on paper towels, sprinkle with sea salt and serve hot.

Hope you enjoy them as much as we do
Posted by Horace Palmer, III at 7:55 PM