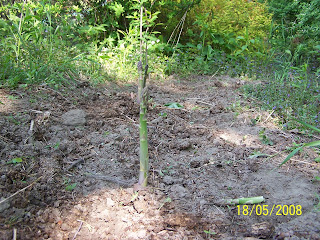 So I’m still on a vegetable kick as my asparagus bed is starting to produce. We had the first few spears in a salad the other night, and there will be enough to cut today for dinner this evening.

Asparagus is a member of the lily family. Its’ Latin name is asparagus officinalis and it has been cultivated for thousands of years. Originating is Eurasia, it was widely grown by the Romans, and is prominent throughout Europe and North America. It is related to the grasses with which it shares a similar structure, unlike most vegetables where we eat the fruit or leaves. We eat the young shoots, which are thick and fleshy, as they emerge from the ground with their tips firm and tight. If left untouched, the spears will shoot up and develop into a large fern-like plant with the tip sending out its photosynthetic branches, known as phylloclades.

It takes three years for a newly planted bed of asparagus to become productive, partially accounting for its high price. As asparagus is a heavy feeder, a deep trench is dug, the bottom filled with good compost or rotted manure, and then a thin layer of soil. The asparagus crowns are laid out about two to three feet apart and covered with more dirt and compost. Over the course of the first year, after the initial small shoots appear, more soil is piled on until the trench is filled to ground level. The bed should be weeded well so that the new plants can establish themselves without undue competition. In the fall, we cut down the dead plants and remove the debris to the compost bin.

By the third year the shoots are large enough to begin to harvest. From then on, the bed will produce an abundance of asparagus spears between mid-May and late June. I’ve read that if you cut down the plants in the early spring they will produce a crop later in the season, but I’ve never tried it, because when the spears begins to appear, we eat all we can until they become too small to bother with. We then allow to plant to grow, the tips to start branching out, and the fern-like plant to emerge. Thereafter, we dress the bed with rotted manure, mulch it, and move on to other vegetables in the garden. There is still time to initiate a bed in your garden this year, and it is certainly worth the effort as a good bed can last for 20 years or more.

Here in the United States, as well as in Italy, asparagus is eaten green, although the tips vary in color from green to violet to purple. In northern Europe, they hill up the asparagus to blanch the plant, keeping the spears white. This is said to produce a milder flavor, but I can’t attest to that.

The tip is the most prized part of the plant as well as the most delicate. For that reason, the classic way to cook asparagus is standing up in a tall, slender pot made expressly for asparagus cooking. The bottom of the pot is filled with 1” or so of water, the spears placed in the boiling water tips up, the pot covered. In this way, the stalks and tips are cooked by the rising steam.

We like asparagus roasted in a hot oven, after having been tossed in olive oil with salt and pepper, or grilled over hard wood coals. In both of these instances, the flavor is more concentrated then by cooking in boiling water. Asparagus loves to be served with a grating of Parmigianno-Reggiano cheese, and it is often wrapped with prosciutto after it has been blanched. Try wrapping it with prosciutto and puff pastry before baking in the oven. Blanched asparagus is paired with butter or a rich sauce like Hollandaise, or the young tender spears can be eaten raw with just a bit of olive oil, vinegar, salt and pepper. It also makes a wonderful creamed soup with the tips floating on top as an attractive garnish.

One side note; asparagus eaters excrete methyl mercaptan, which can cause on strong odor in one’s urine. It is not detectable in all people.

Here’s a recipe for 6 that combines asparagus with its cousin the leek, a wonderful vegetable in its own right.

Snap off the bottom of the spears and cut asparagus into 1” lengths on the bias, separating the tips from the stem pieces. Bring a large pot of water to a boil and add salt. While the water is coming to the boil, sauté the pancetta in olive oil, stirring occasionally, until almost crisp, about 5 minutes. Add the thinly sliced leek and cook until wilted, but not colored, a minute or two. Meanwhile, blanch the asparagus pieces in the boiling water for 2 to 3 minutes, adding the tips after the water comes back to the boil, until just tender. Drain and add to the skillet with the leeks and pancetta. Season with salt and pepper, and toss to coat. Transfer to a serving bowl and serve immediately with roast chicken, lamb or rabbit.
Posted by Horace Palmer, III at 7:18 PM