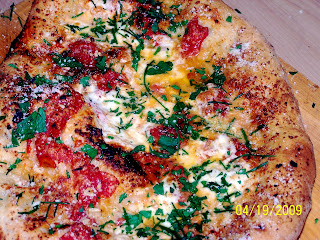 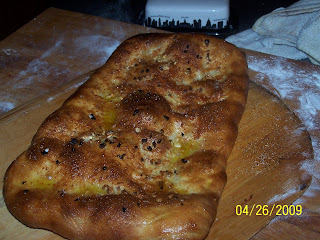 Last week we took a peek into the world of pizza. This week were going to look a little deeper into exactly what pizza dough is made of, and the varieties that one can easily make at home.

First off, however, I need to highly recommend that if you want to make a first class pizza that will knock the socks off any locally produced pie, you have to have an appropriate surface to cook your pizza on. Your choice will affect the outcome of your crust, and, when it really comes down to it, it’s all about the crust. I’m a fan of a pizza stone, which can be purchased at any good kitchen supply store. They are available in a round or rectangular shape. Mine measures about 17” X 15.” I keep in on the bottom rack of my oven most of the time. Alternatively you can use a pizza pan or even a sheet pan, but the crust will not be as good as one cooked on a hot pizza stone.

Secondly, I like to allow my dough to ferment before baking. Fermenting the dough, which to commercial bakers means the “first rise,” allows the yeast and bacteria to feed on the sugars in the flour, producing carbon dioxide, alcohol and acids, which make the dough rise and gain flavor. A single rise of the dough, however, will not be long enough to really affect the flavor, so I allow my dough to rise to between double and triple it’s size, deflate it and either allow to rise a second time, or I refrigerate it until closer to the time I need it. If refrigerated, remove at least 30 minutes before using, and an hour is even better.

Another fermentation method is to produce a “pre-ferment,” what the Italians call a “biga,” This is a piece of dough made from water, flour and a small amount of yeast. It is mixed and allowed to ferment for nine hours or more. After being mixed, allow it to sit at room temperature for an hour or two, then refrigerate until ready to mix the rest of the dough. It will be glossy and porous and have an acidic smell, which will add flavor to the dough.

There are many pizza doughs that can be made without fermenting the dough, however these doughs are more for those who worship the toppings, not the crust. To me, the toppings are a great addition to the pie, but the dough is where the ultimate flavor is brought to the party. I tend to keep my toppings simple and few in number, and the crust is the star.

A commercial baking technique called autolyze in France is helpful in making pizza doughs. The flour and water are combined and allowed to rest for 20 to 25 minutes before the other ingredients are added. During this rest period, the starches and gluten in the flour are allowed to fully absorb the water, which shortens the kneading time and makes a soft dough easier to handle. It also adds to the dough’s extensibility and the dough will have a higher rise.

Next week we'll review focaccia, an Italian flat bread related to pizza. We'll discuss yeasts and which ones you might want to use and I'll provide a white whole wheat focaccia recipe that was very popular at Boldo's.

Here's the highly hydrated dough that is my current favorite. Try it and I think you will like it.

Pour water into stand mixer, add yeast, flour and salt and stir until a dough forms. With the dough hook, mix the dough on medium high speed (8 on a Kitchen Aid) for 15 to 17 minutes. Periodically scrape down the dough hook as the dough will climb it. Up the speed to 10 and knead the dough 3 minutes more until it clears the sides of the bowl, collects on the hook, and is glistening, creamy and very elastic. Check with a baker’s window and if it tears, knead another minute or so.

Transfer to an oiled 3 qt container and allow to triple in volume. Cover and let sit at room temperature 3 ½ to 4 hours. It can be deflated and allowed to rise again, or refrigerated. Remove from fridge at least 30 minutes before using.

Preheat oven and baking stone at 500 degrees for 1 hour.

Divide the dough in 2 on a well-floured board. Let rest a moment before stretching into a long even sided rectangle on pizza peal sprinkled with corn meal or flour. If you don't have a peel, place a piece of parchment paper on the back of a sheet pan, and continue with the recipe. Dimple the dough all over to stretch it out, but don’t over handle. Brush with evoo and sprinkle with coarse salt and optional toppings of garlic and cheese, if using. Slide onto a pizza stone from the peel by sliding edge onto back of pizza stone and quickly jerking pizza backwards, leaving pizza on hot stone.  If using parchment paper, slide it and the pizza onto the hot stone. Bake until bubbled and golden, 15 to 20 minutes. Turn a couple of times as the back of the oven is often the hottest part. Remove to a rack, brush with a little more oil and serve hot.
Posted by Horace Palmer, III at 12:38 PM

Thanks for sharing a very interesting article about A biogas digester septic tank for our home.