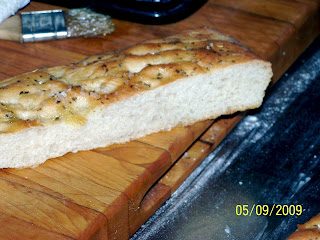 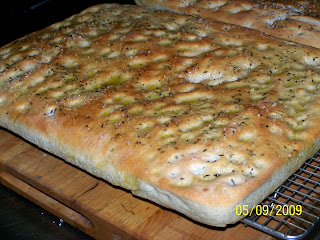 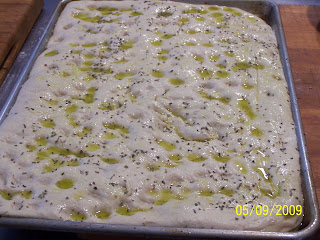 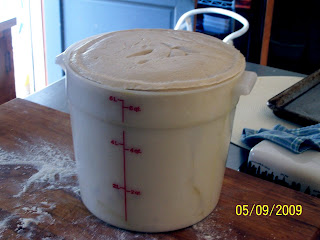 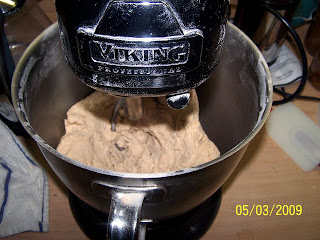 The last couple of weeks we’ve been looking at home made pizza. Today we’ll move on to pizza’s close relative, focaccia, an Italian flat bread which has less toppings and is great for sandwiches or eaten as a quick snack.

First, however, a quick word on the various types of yeast available. Fresh, compressed yeast was the first form of yeast available to both home and professional bakers. Fresh yeast has a short shelf life, so use it up within a few days of purchasing. It must be refrigerated and while it can be added directly to the flour, it works best if bloomed in warm water first. Active dry yeast is most commonly used by bakers as it can be stored at room temperature and remains viable for a long time. It is best if bloomed before using. Instant yeast does not need to be bloomed as its small grains can be completely hydrated when mixed with the flour and water. It can be bloomed, but this step isn’t necessary. I use SAF instant yeast for most of my baking.

Focaccia is a primitive, rustic food that, like a lot of Italian dishes, arose out of poverty and the need to use whatever ingredients one might grow or forage for. It is a simple flat bread that can be topped with any number of herbs, meats, cheeses or seafood, but most commonly includes just olive oil, salt and herbs. Focaccia drives its name from focus, the Latin word for hearth, as it was originally baked either on a hot stone in the hearth or directly on the hearth floor under a mound of hot ash. While eaten all over Italy, it is generally conceded that it’s national home is Genoa, where it is called focaccia. In Tuscany it is known as schiacciata, and in southern Italy pinze. In France pissaladiere with onions and anchovies and fougasse are similar breads.

Foccacce can be thick or thin, crisp or soft, lightly topped with olive oil and salt or topped with a wide variety of ingredients. Sometimes flavorings are kneaded directly into the dough for a little surprise. It could be minced pancetta or prosciutto, garlic, currants or herbs.


The dough is stretched out on a well oiled pan, dimpled with the finger tips, which leaves small indentations to catch the olive oil that is brushed on top to not only flavor the dough, but to help retain moisture inside while the dough cooks. Coarse salt and herbs like oregano, piney rosemary or thyme are sprinkled on top before being placed in a hot oven and sprayed with a mist of cold water that not only helps with oven spring, delaying the death of the yeast, but also helping make the crust golden and crunchy.

While focaccia can be made from most any bread dough, most recipes do include a small amount of olive oil as an ingredient. I like to use a pre-ferment in my breads, so the recipe on the internet will have a biga, a pre-fermented bit of dough which adds flavor to the final product. Once you start making your own focaccia, it will become a regular treat, and it makes fantastic sandwiches when sliced horizontally and layered with your favorite sandwich makings.

Sprinkle yeast over the warm water is a large mixing bowl or mixer bowl. Whisk it in and let stand 10 minutes. Stir in the remaining water and then the flour. Stir with a wooden spoon about 100 strokes to form a sticky dough.

Transfer dough to a lightly oiled container, turn the dough over so it’s covered with the oil, cover tightly and allow to stand in a cool place for 6 to 24 hours. The biga will tripled in volume and collapse back onto itself. It will be bubbly, wet and sticky when ready to use. Scoop out what is needed. The balance will keep in the fridge for 3 or 4 days, or you can freeze it for later use.

Bloom the yeast in the 145 g warm water in your mixing bowl. Chop up the biga and add it along with the room temperature water to the yeast mixture. If making the dough by hand, combine the salt and flour and add it a cup at a time to the water-yeast mixture. When the dough forms, turn it out on a lightly floured surface and knead 6 to 8 minutes. The dough will be sticky, but add just enough flour so you can handle it. If using a stand mixer, use the paddle attachment to combine the flour-salt mixture with the water-yeast mixture. Mix on low speed for 3-4 minutes until the dough forms. Change to the dough hook and knead at medium high speed about 5 minutes until the dough is elastic, sticky and soft, but not wet. You will see bubbles under the skin.

Place the dough is a lightly oiled container, cover tightly and let rise until double in bulk or more, about 1 to 1 ½ hours. Deflate the dough, turn it out onto a lightly floured surface and divide into two equal pieces, sprinkle lightly with flour. Set aside while you prepare the ½ sheet pans.

Oil each sheet pan with 2 tablespoons olive oil. Place one of the pieces of dough on each sheet pan and start stretching the dough out to cover as much of the bottom as possible. Cover with a kitchen towel and let it rest for 10-15 minutes, then stretch the dough out to the edges of the pan. Cover again and let rise for 45 minutes to an hour until the dough is puffy. Preheat the oven for at least 30 minutes at 425 degrees with pizza stone inside.

When the dough has risen, dimple the surface with your fingertips. Brush with 1 tablespoon of oil, sprinkle with the sea salt and minced herbs.
Have a spritzer bottle of cold water on hand. Place the focaccia on the pizza stone, spray the dough and sides walls of the oven with water. Close oven door and reduce heat to 400 degrees. During the first 10 minutes of baking, spray the dough and oven walls twice more, at 4-5 minutes intervals. Bake until focaccia is golden brown, about 18-20 minutes. Immediately remove from the sheet pan and place on paper towels to absorb and excess oil. Cool to room temperature on a rack. Repeat for the second focaccia.
Posted by Horace Palmer, III at 6:54 PM