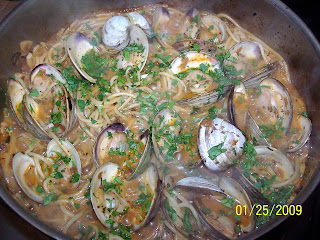 Continuing with our look at seafood, mollusks include not only clams, mussels, oysters, and scallops, but also squid, octopus, abalone and snails. Here in New England we are mostly acquainted with the bivalves, which populate our seacoasts, but there are over 100,000 species of mollusks around the world.

Clams, mussels, oysters and scallops all have a two part shell lined with mother-of-pearl, which varies in color according to the algae that lives in the waters from whence they were harvested. A large adductor muscle, which is always edible, controls the opening and closing of the shell, This muscle comprises the portion of the mollusk that we consume, and it is detached from the shell when the mollusk is eaten raw, and attached to the shell when cooked. The scallop also has a coral, which is thrown away in this country, but used elsewhere to flavor the sauce that accompanies the shellfish.

Mollusks in general are lean and low in cholesterol with high protein content, abundant mineral salts and great taste and texture if handled properly. As shellfish use amino acids to counteract salt concentration, the saltier the waters they come from the more savory the shellfish. They have a mouth filling quality while being both slick and tender when consumed raw, but they are chewy when cooked.

Most shellfish should be eaten in the colder months of the year, with November to April being the ideal months. The old saying is oysters are only eaten in a month with an “r” in it, and this is primarily due to their breeding during the summer months. While today they fly oysters in from all over the world and oystermen don’t harvest from breeding beds, it’s best to follow the old rule if only because you’ll be eating a local oyster, and local is best.

Mussels are mostly farmed in gravel filled mesh bags and can be safely eaten, if acquired from reliable sources, year round as can clams and sea scallops, also. The best scallops are “diver” dry scallops, which are hand picked by deep sea divers, and have never been immersed in a solution of polyphosphates which the adductor muscle absorbs, becoming plump and glossy white. Sea scallops usually come in on boats that are out fishing for days or weeks, so they are less desirable as these scallops have been treated in solution. “Bay” scallops, of which the Nantucket bay scallop is one of the most prized, are small scallops hand dredged from harbor floors during the winter months, and are delicious eaten raw right out of the shell or freshly shucked. Any I buy around here, I always cook.

All clams, mussels or oysters should have a hard outer shell, and have been stored on ice, but not in water. They should be alive as evidenced by their shell snapping shut when they are rapped with a knife. Any that don’t close should be discarded. Clams, both hard shell and soft shell, can be soaked in salted cold water for a couple of hours with some corn meal mixed in to purge any sand or ingested foods before being prepared to eat. Hard shell clams include large chowder clams called quahogs, medium sized cherrystones and the smaller little necks, both delicious raw on the half shell with a drop of lemon. Soft shell clams, with their characteristic siphon protruding, are traditionally steamed and served with a mug of the broth for dipping, and a container of melted butter. Clams, mussels and oysters…I love them all!

Heat oil in a 5- to 6-quart heavy pot over moderately high heat until hot but not smoking, then sauté onion, stirring, until golden, about 4 minutes. Add garlic, red pepper flakes, and oregano and cook, stirring occasionally, until garlic is golden, about 2 minutes. Stir in wine and clam juice and boil, uncovered, stirring occasionally, until slightly reduced, about 3 minutes.

Cook pasta in a 6- to 8-quart pot ofboiling salted water until al dente, then drain in a colander.

While pasta is cooking, stir little necks into sauce and simmer, covered, stirring occasionally, until little necks open wide, 4 to 6 minutes. (Discard any little necks that have not opened after 6 minutes.) Remove from heat and stir in butter until melted.

Add pasta to little necks along with parsley and salt to taste, then toss with sauce until combined well.