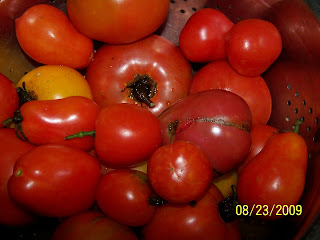 You have been able to purchase local tomatoes for quite a while now, despite the tomato crop devastation brought on by the late blight.  This disease struck many farmers hard in August just as their field crops started to bear fruit.  Many heirloom varieties that would normally be crowding farmers’ markets and roadside stands right now, while still available, are found in smaller quantities and with fewer varieties.


We’ve been pretty lucky so far at our house, for while we lost some plants that Rosemary planted on the periphery of the herb garden, our main crop in the vegetable garden is daily bearing a variety of fruits from sauce tomatoes, to heirlooms like Black Russian and Green Zebra, to red and Sun-gold cherry tomatoes to large lobed Brandywines and oval yellow Lemon Boys.   I love the tomato harvest;  tomato salads with Vermont farmstead blue cheese, tomatoes with fresh mozzarella, basil and extra-virgin olive oil, fresh Marinara sauce, BLTs on toasted Red Hen bread with pesto, arugula, Hogwash Farm’s pasture raised bacon, and a slab of Big Boy tomato still warm from the sun, oven dried plum tomatoes with garlic and fresh thyme, or noshing down a ripe Cherokee Purple right out in the garden.  Yum!


Solanum lycopersicum is a member of the nightshade family, and long suspected of being poisonous (its leaves and the roots of many of its cousins are poisonous).  It is grown as an annual plant in our clime, producing the ovary of a fruit, which we refer to as a vegetable.  Usually colored red, many varieties are yellow, orange, purple, black, pink, mottled green and yellow, or red and green, and some are almost white.  Their shapes can be large and round, to heavily lobed, to cherries, grapes or currants; from smooth to having pronounced ribs, to elongated and plum shaped to squat and flat.  There even is one called the Ugli Tomato, which was banned in Florida due to its multi-ribbed appearance, in spite of its excellent taste. 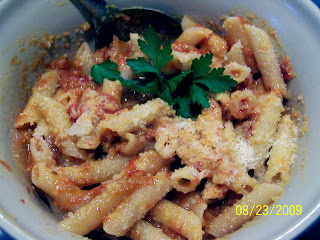 
Heirloom varieties have made a strong come back recently, as their taste and texture are superior to commercial varieties bred more for their shape, size, and color, and mutated to resist natural pests.  This is the time of the year to really enjoy a good local tomato, ripened on the vine.  What is in the supermarket was picked green in California or Florida, “ripened” by ethylene gas which turns it red, but doesn’t really ripen the flesh, and shipped in a refrigerated container across America to your local store.  NEVER, and I mean never, refrigerate a tomato!  It not only dulls and kills its taste and muddies its texture, even when returned to room temperature, it will not improve.


The tomato originated in South America, probably Peru, before migrating to Mexico, where explorers returned to Europe with seed in the 1500s.  Here it was grown as an ornamental plant until its culinary properties were realized, particularly in Italy, Spain and the Middle East.  Today the tomato is central to the Mediterranean diet, which emphasizes lots of fresh vegetables and fruits, olive oil, cheese and yoghurt with moderate amounts of seafood and poultry, and modest quantities of red meats and wine.

Next week we’ll continue to look at this flavorful “vegetable” that is used so commonly in everyday cuisine. 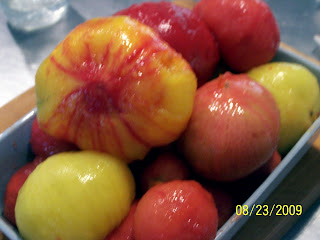 Peeled fresh tomatoes for sauce
Posted by Horace Palmer, III at 8:43 AM

enjoyed reading this so much--great info.