This year’s apple crop is starting to hit the markets.  I bought a peck bag that included my choice of Ginger Gold, Macoun, McIntosh, Honey Crisp and Paula Red, some for eating and some for an apple tart.  I know, it’s “American as apple pie,” but Rosemary makes the pies and I make the tarts.  She’s Fanny Farmer and I’m Julia Child, or maybe Paul Bocuse. 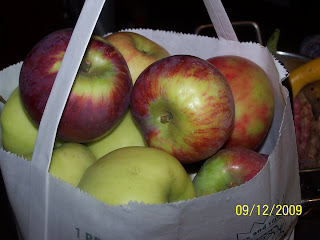 Apples, which are related to pears, are part of the rose family.  Malus demestica consists of 15,000 or more varieties, or which some 2,000 are American.  Originating is Asia Minor, apples are grown all over the world, and are the most popular fruit not only in the US, but also Britain, France and Germany.  China, of course, is the world’s leading producer, the US second while Iran and Turkey vie for third.

The apple is propagated primarily by the asexual act of grafting, as planting an apple seed will not result a seedling with the same characteristics as its parent.  In fact, the result is often radically different.  When Johnny Appleseed hastened westward to keep ahead of a burgeoning population, planting his orchards of apples, the settlers found that most of the apple crop consisted of “spitters,” that were so astringent as to be inedible, but they made great cider, which converted into alcohol, so his coming was legend.  While hard cider is fermented, applejack, apple brandies and Calvados are distilled apple liquors.

Cider apples (real tart) are one of the four apple groups, the others being dessert or eating apples (crisp and juicy), cooking apples (tart when raw, balanced when cooked), and now dual purpose apples like Golden Delicious and Granny Smith.

Apples are most associated with desserts, and American originals include apple crisp, apple grunt, and apple pandowdy.  Applesauce, flavored with cinnamon, is eaten with pork, and apples are stewed with red cabbage and braised with chestnuts, and included in Waldorf Salad.  Sliced apples, chutneys and cheese are a common appetizer, but most apple concoctions are for after the main meal.  Apples, with their cell-wall pectins, have good jelling characteristics when cooked down, so they are often made into apple jelly.

Sliced apple will oxidize to an unappetizing brown in a short time if left untreated.  This browning can be prevented by tossing peeled, or sliced apples, with an acidulated liquid like lemon juice, where the high acid environment slows down the natural browning process. 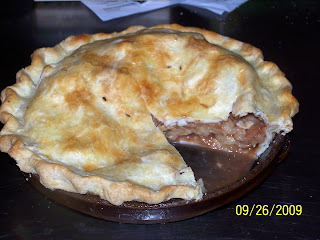 Most varieties of apple store well in an atmosphere rich in carbon dioxide, which restricts ethylene gas from ripening the fruit prematurely, so even local apples are available well into the winter and early spring after a fall harvest.

“An apple a day keeps the doctor away,” may be an old saw, but it has a lot of truth in it.  While apples are not high in Vitamin C and other antioxidant compounds, they show preventive properties relative to cancers of the colon, prostate and lungs.  As they are cholesterol free, contain fiber and are bulky, they assist with bowel cleansing, heart disease and weight loss, which many of us could benefit from.

So be it a glass of cider, an apple pie or the crisp crunch of a snappy new McIntosh, now is the time to enjoy our most prolific fruit that grows all about us.

A few gratings of nutmeg

Preheat oven to 375 degrees.  Spray a shallow 8 1/2" X 11" glass or enamel baking dish with vegetable oil and set aside.

Toss together the crumbs, sugars and spices in a medium bowl.  Set aside.

Place the apple slices in a second medium bowl.  Squeeze the lemons over the apples, straining out the seeds.  Toss the apples so they are all coated with lemon juice.  This will prevent browning.

Cover the dish tightly with aluminum foil and bake until the apples are tender, 30 to 40 minutes.  Remove the foil, increase the heat to 400 degrees and let bake until the top crumbs are deeply golden and crisp, about 10 minutes.  Serve, warm but not hot, with one of the accompaniments.