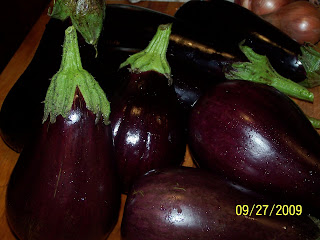 We’ve been harvesting eggplants from our garden for a number of weeks now.  I was first introduced to eggplants when I worked at the Blair Mansion Inn in Silver Spring, Maryland in 1971, while I was courting Rosemary in the District of Columbia area.  We made Eggplant Parmigiana there, and I remember prepping eggplants a bushel at a time.  We’d cut them into slices, salt the slices, let them sit for 30 minutes or more, then brush off the salt and liquid they had exuded, and bread them by dredging in flour, then beaten eggs, and fresh breadcrumbs.  Thereafter the breaded eggplant slices were par cooked in hot oil and frozen for future use.  When an order came in, the chef would splash some Marinara sauce on a sizzle plate, layer the eggplant with grated mozzarella, parmesan cheese, and sauce, and roast in a hot oven until the cheese was melted and browned and the eggplant cooked through. 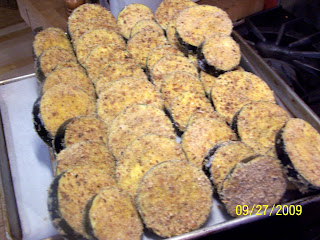 Eggplant, known as aubergine in Europe and the Middle East and brinjal in its native India and Pakistan, is a member of the nightshade family, Solanaceae, and closely related to tomatoes, potatoes and tobacco.  A perennial plant in temperate climes, Solanum melongena is grown as an annual in New England.  While we know it primarily as a dark purple, elongated ovoid, it also grows in a variety of shapes (short and squat to long and thin, often curved, to even egg shaped ones) and colors (pink, yellow, green, white and stripped).  As it is related to tobacco, historically its nicotine alkaloids contributed to a bitter flavor, which was purged by salting the sliced flesh.  Over the years, breeders have selected against the bitterness, so while today it no longer remains a problem for cooks, salting eggplant before cooking still has benefits in lessening the absorbent properties of its flesh.  Anyone who has sauted some eggplant knows it will soak up all the oil you put in the pan before it starts to brown. The application of salt collapses the cell walls of the eggplant flesh, expelling air as well as liquid, and leaving less space for oil to enter and become trapped. 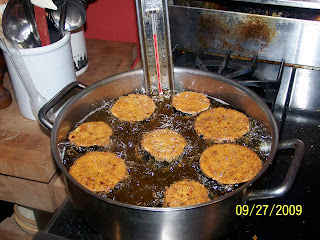 One of the most famous Arabic eggplant dishes is Iman bayaldi, “the priest fainted.”  In this dish, the eggplant is stuffed with onions and tomatoes and cooked in copious amounts of oil, most of which it absorbs.  Supposedly the priest fainted either because the dish was so delicious, or later when he heard how much oil his wife had used to make the dish. 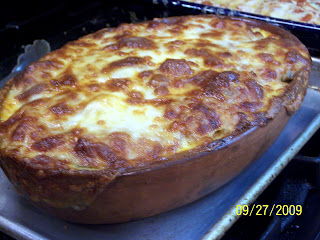 In an earlier column I wrote about Ratatouille, the French dish comprised of eggplants, tomatoes, zucchini and onions.  The Greeks have their Moussaka, a native dish that combines lamb with eggplants, tomatoes and cheese, the Italians their Melanzane alla parmigiana with eggplants, tomatoes and cheese, and the Middle East its baba ghanoush where creamy roasted eggplant is combined with tahini (ground sesame seeds), lemon and garlic.  These are just a few examples of world class dishes comprised of eggplant, so if you haven’t tried any lately, they are available from local sources now, so it’s a good time to check out this savory vegetable known as “vegetarian’s meat.”

1 cup all purpose flour seasoned with a 1/2 tsp. salt & a grinding of pepper

Slice the eggplant into 1/2" rounds.  Sprinkle with the salt and drain in a colander for 30 minutes or more.

Deep fry the breaded eggplant in 375 degree oil for a minute or so on each side, until the bread crumbs are browned and the eggplant is just cooked through.  Drain on an absorbent towel.

Bake uncovered in a 375 degree oven for 20 -25 minutes or until hot and bubbly with the top browned.

Let rest for 15 minutes at least before serving.  Good at room temperature, and better the next day.