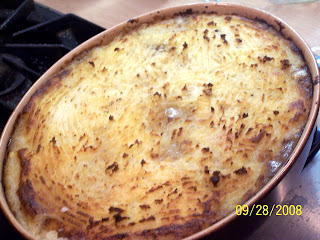 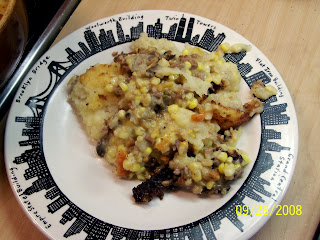 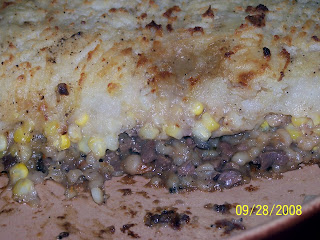 Some of us have avoided a frost so far, so we’re still enjoying some good eats from the garden and area farm stands. I particularly enjoy late season corn and as I picked up some of the first fall lamb at the farmers’ market this weekend I decided to combine the two along with some local potatoes into a shepherd’s pie.

Now, when I was growing up, I remember my Mom making shepherd’s pie with a layer of meat, a layer of corn and a layer of mashed potatoes. However, in researching shepherd’s pie, I don’t find that the inclusion of corn is traditional. True shepherd’s pie includes lamb, and, when beef is used, it is known as cottage pie. Originating in the UK, particularly Scotland where a lot of sheep are raised, it was a dish concocted of leftovers from the previous night’s roast. Chop up the uneaten meat, combine with some sauted onions and gravy, top with mashed potatoes and bake in the oven until hot and the potatoes slightly browned. A simple, peasant dish, but also one that we can a lot more fun with if we apply ourselves a little.

In France, for instance, they make a similar dish known as hachis parmentier, named after Antoine-Augustin Parmentier, a French agronomist, nutritionist and pharmacist who at the forefront of introducing and popularizing the potato in his country. Hachis, related to “hatchet” in English, means chopped or minced. In this instance, the French combine diced meat with a sauce Lyonnaise (a compound of white wine, vinegar and onions) and mashed potatoes and serve the mixture in potato shells. Clever.

Many recipes call for the inclusion of a variety of vegetables like green beans, peas, carrots, or winter squash with the meat mixture, or, in some instances, above the meat and below the potatoes. Some include tomatoes or tomato sauce mixed in with the meat layer, while others include (ugh!) cream of mushroom soup, but I myself would merely sauté some button or cremini mushrooms with the meat and add some béchamel sauce if I didn’t have any left over gravy or meat stock. I’ve also seen cauliflower steamed and mashed with the potatoes for the topping, another interesting variation on the theme. I myself like to sprinkle the mashed potato layer with some fresh breadcrumbs seasoned with garlic and grated Parmigiano-Regianno cheese for added flavor.

When we include corn in our Shepherd’s Pie it becomes “cowboy” pie or, to some, Chinese pie, a French-Canadian version that uses canned or creamed corn between the meat and potatoes. Sometimes it is served in Canada with pickled beets or eggs and it often has ketchup mixed in and/or paprika sprinkled on the potato layer. The origin of the name, Chinese pie, has nothing to do with the nature of the ingredients, but it is thought that Chinese laborers building the railroads in the western US introduced the dish to Canadians, who brought the dish home with them, calling it pate chinois.

Let me warn you, however, that is you google “cowboy pie” you will find a lot of recipes using salsa, cilantro, canned Pinto beans, cornbread mix and other canned, convenience food ingredients. OK perhaps if you are a chuck wagon cook feeding some hungry cattle-herding cowpokes, but we can do much better with fresh local foodstuffs as the basis for our recipe.

Of course there are shepherd pie versions that include fish, known as fish pie or fisherman’s pie, and meatless versions for vegetarians where beans are often used in place of the meat, and the dish is known as shepherdess pie. In some societies, biscuit dough or a pastry crust is utilized as the topping either in place of, or, in conjunction with, the potato topping.

However one chooses to make their shepherd’s pie, it always evokes a sense of tradition and rural cooking, and like many classic dishes it evolved from the food of poverty where no scrap or leftover could be wasted. So in today’s world of rising food costs, it is a good dish to know and make at home to stretch our food dollars while providing tasty and nutritious meals for our families and friends. I don’t think you’ll find many folks here about who won’t pull up a chair to enjoy a hearty meal of home-made shepherd’s pie if it is offered, so let’s enjoy our local bounty while we can, because winter is coming down the pike at us, it will be here soon enough, and we’ll have to resort to goods that aren’t growing outside anymore.

Preheat the oven to 350 degrees.

Cut the lamb shoulder into small pieces, sprinkle with salt and pepper, and sauté in a hot pan with the vegetable oil until browned on all sides. Do this is small batches, or the meat won’t brown properly. Remove the meat to a side dish until it is all browned.
Alternatively, use some leftover roast or ground beef.

Add the mushrooms and sauté until beginning to brown. Add the carrots, barley, stock and beer. Return the meat to the pan, and bring to a simmer over medium heat. Add the bay leaf and the thyme, cover and place in the oven to braise slowly for 1 hour, or until the meat is tender and the barley cooked through. The barley will have absorbed most of the liquid, but if too soupy add some flour mixed with butter to thicken the gravy.

Meanwhile, cook the corn kernels in melted butter about 3 minutes on medium heat. Stir in the flour and cook 2 to 3 minutes to remove its uncooked flavor. Blend in the milk and simmer until slightly thickened. Correct the seasoning.

Peel and cube the potatoes. Steam or boil them until tender. Drain in a colander and place a tea towel over them to allow them to steam a few minutes. Mash the potatoes with the warm milk and butter (add some Parmigiana cheese, if you like).

Lightly butter a casserole or gratin pan. Spread the meat-barley mixture over the bottom. Spread the corn mixture on top. Cover with the mashed potato mixture. Use a fork to make uneven peaks in the potatoes. Dot with softened butter and a sprinkling of paprika, if you wish. Bake at 400 degrees for 30 to 40 minutes until the dish is hot and the potatoes are golden brown,

Serve with a garden salad and a crusty loaf of bread.
Posted by Horace Palmer, III at 6:17 AM