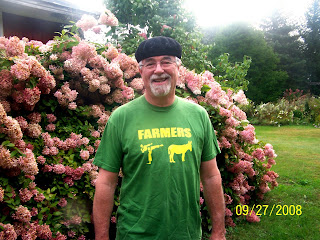 This past week saw three items related to food that have got me thinking and concerned about the future. On Wednesday, an article in the food section of the New York Times discussed the latest changes the big food companies are making to their products to try and convince consumers of the health benefits of chemically adulterated offerings, on Friday a front page story in the Valley News introduced us to the FDA’s involvement in genetically modified meat and fish, and on Saturday, Rosemary and I attended the Farm Aid music concert in Marshfield, Massachusetts, a event that is in it’s 23rd year in support of the family farmer. To me, the confluence of these three events and their implications for food in our society, were almost as disturbing as the massive financial crisis that is playing itself out on Wall Street and in Washington.

Let’s start with the advent of nutraceuticals, a term so new my word processing program thinks it’s a misspelling, which is defined as meaning a food additive which is derived from one food, and purports to import the health benefits of that food into it’s recipient food. Previously food supplements like garlic pills or gingko tablets, which were popular for a while in the 1990s, would be a related example. Now Tropicana, famous for orange juice, will include anchovies in their juice so one can derive the benefits from the anchovies’ omega-3 fatty acids while having breakfast. They will market the product under the name Tropicana Heart Healthy orange juice. Of course, they will have eliminated the anchovies’ taste and smell, so you won’t even suspect its presence unless you read the label. Similar products are on the drawing board at the other major food companies (Tropicana is owned by PepsiCo) like Dannon, Kraft and General Mills. According to the Times’ article, a 1999 court decision giving makers of food supplements broad latitude in advertising the health benefits of their products is the gateway to the introduction of these “functional foods,” as they are being called.

‘Functional foods’ have been modified to enhance their nutritional benefits, like vitamin D fortified milk or iodine-fortified salt or enriched flour, all of which helped to eliminate certain diseases in our country like rickets, goiter and pellagra. The new “functional foods” aren’t aimed directly at disease eradication, as in the past, but more at delivering what are currently thought to be nutritional benefits of an under-consumed food to those actively consumed, with certain health benefits accruing to the one ingesting the product. While there is widespread scientific agreement on the benefits of calcium, fiber, folic acid, soy protein, omega-3 fatty acids, lactic acid bacteria, beta-carotene and others, it has not yet been proven that adding them in supplemental form actually works. Recent studies surprised the scientific community when the inclusion of certain antioxidants taken in supplemental form had no beneficial effect on cardio-vascular disease. Scientists do not yet know how compounds in food are made available to the body, so I would urge caution on these new offerings to consumers, and I know that none of them will make my shopping list. I want my food unadulterated and natural, grown locally, and raised or grown on a sustainable farm by someone I can talk with about it’s origin, cultivation, feeding and harvesting. The food we eat at our house doesn’t come with labels, encased in plastic and Styrofoam, or covered with wax or insecticide residues or nutritional sprays. In fact, the food at our house comes not from the supermarket, but directly from area farmers.

Equally upsetting was the Valley News story derived from a Los Angeles Times article about genetically modified salmon, cows, pigs and goats. The FDA, our “friends and protectors” in Washington, are developing guidelines for food companies to produce genetically modified animals as if they were drugs. These massive food entities want to raise salmon faster, produce mad cow resistant cattle, and omega-3 rich pigs. Some genetically modified animals, called ‘biopharm animals’ would produce certain drugs, like insulin. Of course, the FDA’s approval process, to be fair to the big companies at the expense of the consumer, would be highly secretive to protect proprietary processes from competitors’ eyes, leading skeptics like myself to urge rejection of the whole idea. Many have already raised concerns about the potential environmental impacts of these “Frankenstein animals.” The whole genetically modified food initiatives aren’t about healthy, nutritious food, they are about agribusiness profits at the expense of local farmers and consumers.

So despite these assaults on food reason and responsibility, there are people out there who are working diligently to restore the benefits of the family farm, the bedrock of our food society. Since the first Willie Nelson inspired Farm Aid music concert in 1985, 300,000 family farms have disappeared in America. As John Mellencamp told the audience, when the first Farm Aid concert was produced, they thought Washington would actually listen and reverse the course established by then-Agricultural Secretary, Earl Butz, to “Get big, or get out!” The Nixon administration encouraged the advent of the factory farm at the expense of the family farm, and we have “Tricky Dick” to thank for the state of agribusiness in America today. We have agricultural pollution, petroleum based fertilizers, insecticides, and pesticides depleting our land and running off into our waterways, mono-culture factory farms with their horrific animal husbandry practices, genetically modified foods, irradiated foods, country-wide food recalls, tainted products from China and more, instead of locally raised foods from our friends and neighbors. It’s time America woke up to plight of the family farm and supported the people who act responsibly to their crops and animals, the environment, and consumers. It is your choice, dear reader, to go blindly to the supermarket, buying whatever is on the shelf or in the cooler, with out consideration of its origin, alteration or rearing practices, supporting the status quo of a massive food industry built on political influence and profiteering, or helping locally responsible farmers who value the environment, their crops and animals and you, their consumer. Fortunately, locally and all across America, more and more people are waking up to the benefits of local, sustainable agriculture, and our agricultural base is becoming more diversified, producing more products for our table. And let me add, these products are the real thing, not altered or ‘improved’ by science, but what evolution wrought. These products are natural as is your body and soul. So it only makes sense to use these goods in our daily life, and by extension, we support our environment, our family farms and our health. Do the right thing for your family and community…buy local from our family farmers. It’s an old concept that is new again!
Posted by Horace Palmer, III at 7:12 AM