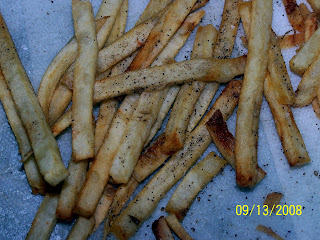 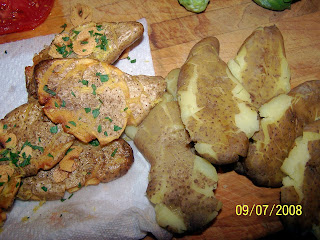 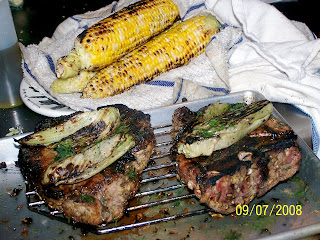 At your local farmers’ market these days you will find a growing variety of potatoes are now available. Russets, Red Bliss, Kennebunks, Yukon Golds, Green Mountains and other varieties are now appearing, and, dug fresh from the ground are delicious to eat. Usually potatoes are cured for a short period of time to allow their skins to thicken as this benefits their storage capabilities, however “new potatoes” with their thinner skins have a delightful flavor and should be enjoyed now while their season lasts. Anyone who grows their own potatoes enjoys slipping a few new potatoes out from beneath a growing plant to accompany their evening meal.

The potato is a starchy, tuberous plant originating in South America. It was long grown by the Incas and other South American tribes eons before the Americas were discovered in the 16th century. There are still 3,000 varieties of potato grown in South America, every shape, size and color imaginable. The Spanish brought the tuber back to Europe where it met with mixed success early on. In Ireland, of course, it became widely grown and counted upon by the masses as a staple in their diet as it supplied a ready source of protein. In fact, British social scientists raised the alarm that the potato would be the scourge of European civilization as it provided the impoverished masses with a ready dietary supplement that met their safety and security needs, allowing them to move up what would become Maslow’s “hierarchy of needs” pyramid to sex. The result was a population explosion that actually commenced as the Industrial Revolution was beginning, allowing capitalists to find eager workers for their factories, with the eventual evolution of the modern middle class.

A member of the nightshade family, the potato, Solanum tuberosum, is actually a perennial plant grown worldwide. While it produces a flower and seeds, it is most commonly cultivated by planting pieces of the potato tuber containing “eyes”, an asexual practice known as “vegetative propagation.” The Colorado potato beetle is it’s natural predator, and as such has developed a resistance to commonly used insecticides, none of which I would use in my garden anyways. It is best to remove these orange/red pests by hand, dropping them into a can of kerosene or gasoline. In The Botany of Desire, Michael Pollan tells his story of growing a Monsanto potato variety where the plant has been genetically engineered with a beetle pesticide incorporated into its DNA, giving it resistance to it’s nemesis. While Pollan wrote that the plants grew beautiful potatoes, he could never bring himself to actually eat these mutated tubers, thus they shriveled up, and started to sprout, while sitting in a box on his back porch. I think it is best to resist easy fixes from the Monsanto “frankenfood” wonder-scientists and stick with naturally developed varieties.

Potatoes are either “waxy” or “floury.” Waxy varieties boil well and don’t fall apart, lending themselves to potato salads and dishes like gratin dauphinois, a French scalloped potato dish made with milk and Swiss cheese. The floury varieties, like our russets or Idaho potatoes, are best for baking, mashing or making into French fries or potato chips. Fingerling potatoes have become more popular and common recently, and sweet potatoes, long a staple in the south, have their place, even if not directly related to the “Irish” potato, a common term for white potatoes. One can also find some of the colored varieties, like Peruvian blue potatoes, which are heirloom breeds.

As potatoes are eaten all over the world, the variety of recipes available for the adventuresome cook is almost inexhaustible. Even in America we see the potato in omelets, in stews, chowders and soups, as hash browns, as dumplings (i.e. gnocchi), potato pancakes and latkes, fried as fritters or croquettes, mashed, fried a chips or fries, boiled, steamed, baked and as toppings for other dishes, like Shepard’s Pie. They are the most common starch in the American diet, so preparing them in a large number of ways is requisite for the home cook to keep the hungry hoards from grumbling about the diversity of their repasts.

The potato is best known, nutritionally, for its carbohydrate content. While that content is primarily in the form of starch, the potato contains a number of vitamins and minerals important to our health. Much of the potatoes’ dietary fiber is contained in its skin, or just below the skin, however over half of the potatoes’ nutrients are contained within the potato itself. So peel them or not, as you choose or the application calls for, but remember as you discard the skins that you are throwing away a lot of goodness. Potato skins are now a treat all by themselves.

While you can use a microwave to “bake” a potato, and your machine probably has an “baked potato” button on it, you won’t get the nice crispy skin you can achieve in your oven when you lubricate its skin with butter or oil, and salt and pepper before baking, although you will save time and energy, both important considerations in today’s world.

While I was cooking at Balducci’s in New York, I used to make these “smashed fingerling” potatoes every day, and they flew out of the prepared food case and were frequently called for on the catering menu.

Cook the whole fingerling potatoes in boiling, salted water until done, 10 to 15 minutes depending on their size. Drain and allow them to cool completely. When cool, take them individually and place the flat side of a cleaver or large chef’s knife atop them, giving them a blow that squeezes out some of their insides while keeping most of the skin intact.

I use a Japanese mandolin to get very thin, uniform slices of garlic. Take the sliced garlic chips, place in cold oil to cover, and turn the heat on beneath them. They will sputter as the oil heats up and their moisture is cooked off, which will take a few minutes, but watch them closely as they turn golden brown quickly and should be removed and drained at this stage.

Bring a pot half full of oil up to 360 degrees to 375 degrees and add the smashed fingerlings. Cook until they are golden brown and delicious, season with salt and pepper, the lemon zest and garlic chips. A dusting with parsley completes the dish.
Posted by Horace Palmer, III at 5:20 PM