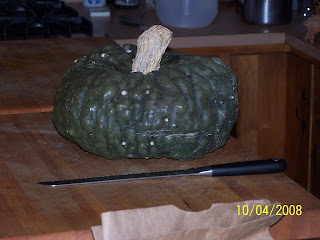 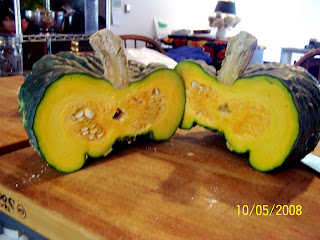 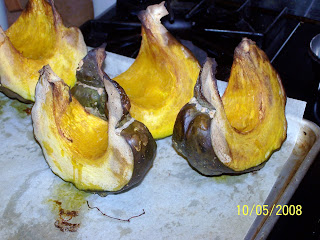 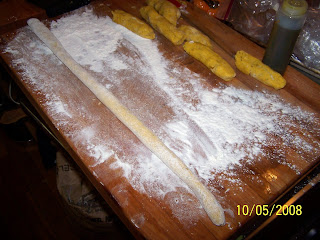 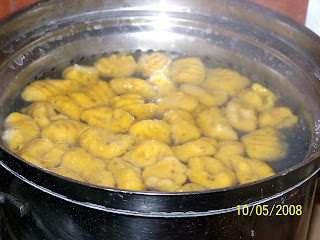 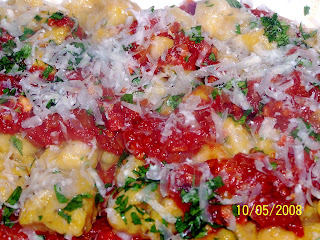 One of the fun things about the Norwich Farmers’ Market is that the vegetable growers, like Craig Putnam of Echo Hill Farm in Orford, grow some unusual varieties of plants that are not traditional in New England. This past Saturday Craig was displaying some large, green winter squash called Marina di Chioggia, an Italian variety prized for its flavorful flesh. Craig informed me that this large knobby squash, covered with sugar warts, is commonly used in Italy to make gnocchi, those little dumplings more commonly made with potatoes and flour. Having made raviolis with winter squash in the past, I was immediately intrigued, so I purchased one, which weighed 11 lbs. 10 oz., a mighty zucca.

The Marina di Chioggia originated in the seaside village of Chioggia near Venice on Italy’s Adriatic coast. Chioggia is also the home of the Chioggia Beet, also known as the “candy stripped” beet for its alternating concentric rings of scarlet red and white inside. This squash/pumpkin is a member of the cucurbita maxima family and is somewhat turban shaped with a green to blue-green skin. Its Italian name literally means “Chioggia sea pumpkin," and it is an heirloom variety, not a seed company hybrid. It is a good keeper, storing up to 6 months in a cool, dry place, although the skin may change color with time from green to a dark orange.

In Italy it isn’t uncommon to see street vendors of these squash grilling slices with a little olive oil, salt and pepper for passers by to eat with their fingers. Waverly Root in The Food of Italy mentions zucca gialla di Chioggia in marinata where peeled slices of squash are baked with olive oil, then garnished with basil leaves, and the squash slices have boiling vinegar, in which salt and pepper have been cooked, poured over them. The squash is then eaten cold after several hours in the marinade.

I found that this squash did make wonderful gnocchi. The squash I cooked wasn’t too moist and I didn’t have to add a lot of flour to make a nice squash dumpling. Many sources indicated that after the squash was cooked it would be necessary to allow the puree to drain for an hour or more, but that was not the case with this squash (and have you noticed, this year’s buttercups are dry as a bone…wonderful!). After baking the squash in large pieces, I scooped out the orange flesh and pureed in my food processor. I combined a single baked russet potato, which I put through my ricer, with one and a half cups of the squash puree before adding about a cup of flour and other flavorings, like garlic powder, salt & pepper and some dried thyme. The resulting dough was moderately sticky, but rolled out beautifully on a floured board. I cut the rolls into ½” pieces and marked them with the tines of a fork, dropping them onto a floured surface to await cooking.

I cooked the gnocchi in boiling water. They sink to the bottom of the pot when placed in the water, but rise to the surface in a minute or so. After they bob up, simmer them for about 30 seconds before removing them with a large skimmer. I sauced the gnocchi with a light tomato sauce and grated Parmesan cheese, but they are also good with just melted butter and grated cheese.

Cook the potato and rice into a large bowl. Allow to cool completely
.
Cut up the squash into large pieces, remove the seeds. Rub with olive oil and roast in a 400 degree oven for 45 minutes or until easily pierced by a fork. When cool enough to handle, scoop out the orange flesh and puree in a food processor. If the flesh is very moist, allow to drain for an hour or more. Allow squash to cool completely.

Combine the squash with the potato, add the herbs and seasonings and start adding the flour in 1/4 cup increments. The mixture will start to come together. Only mix in enough flour to make a soft dough. Knead lightly and divide the dough into 6 or 8 pieces.

On a floured board, roll out each piece of dough into a long rope, about 1/2" thick. Cut into 1/2" pieces. Using the back of a fork, roll each piece of gnocchi across the tines and allow to drop onto a floured surface. This puts a series of grooves on one side of the gnocchi and leaves you thumb print depression on the other.

Bring a large pot of water to the boil, add salt, and drop in the gnocchi. They will sink to the bottom of the pot initially, but will rise to the surface within a minute or so. When they all come to the top allow to simmer, not boil, about 30 seconds more.

Remove gnocchi with a spider or large skimmer and either sauce with a fresh tomato sauce or serve plain with melted butter and a grating of Parmigiano-Regianno cheese.

Thanks for the recipe. I've had one of these sitting on my counter since October and now that we are decorating for Christmas, I need to make it into something. I'll give your gnocchi a try, even though I've never attempted making them.