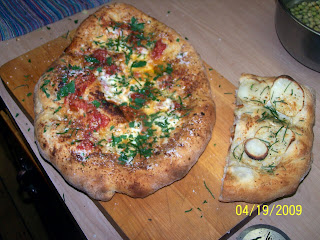 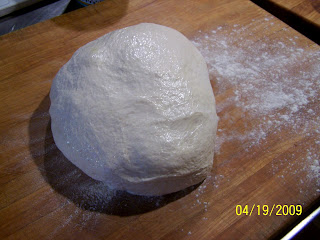 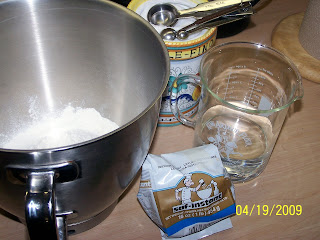 Everyone loves pizza, so let’s take a look at this popular dish with its many varieties, and see how we can make a high quality product at home. Pizza dough can be purchased from a local pizzeria to be cooked at home, or some stores sell pre-made pizzas that you finish in your oven at home. Frozen pizzas are ubiquitous, but I’ve never had one that could come close to a hand-crafted pizza cooked on a pizza stone in my own oven. We like to make our dough at home, and there are numerous recipes depending on whether you’re making a thin crispy crust or a thicker, chewier crust, or a deep dish crust, or a calzone, a form of folded pizza.

Pizza originated in Naples, Italy which is the epicenter of any pizza aficionado’s universe. In Naples, the making of pizza by specific traditional methods is codified into law, giving you an idea of how serious they take their pies. Consisting of a thin bread dough crust, pizza can have a large variety of toppings from the simplest to the most elaborate, as in today’s California pizzas, with their fresh vegetables and local fare, popularized by Wolfgang Puck. New York-style pizza is thin crusted, but flexible as New Yorker’s like to fold their pizzas when eating. Chicago has it’s deep-dish pizza, where the dough covers the bottom and sides of a deep spring-form pan, and a large number of ingredients like cheese, meats and the sauce, usually on top, fill the interior. Greek-style pizza has a thick crust and is cooked in a pizza pan usually with ingredients like feta cheese, Kalamata olives, and spinach.

Pizzas can be cooked on a pizza pan or directly on a stone, which has been preheated to a high temperature. Some of the best pizzas are cooked in a wood or, even better, coal-fired oven. When I was in New York, I frequented Lombardi’s in lower Manhattan and Grimaldi’s under the Brooklyn Bridge where they have coal-fired ovens. The pizzas would come to the table smoking, with little areas of the crisp crust scorched by the heat of the oven, which is heated to about 900 degrees.

We like to use high gluten flour, marketed as “bread flour,” for our pizza doughs. In addition, we prefer a more highly hydrated dough as this adds to the dough’s extensibility, which is its ability to stretch. More water means an open, bubbly structure to the dough, and a wet dough will result in a highly caramelized crust, making it more flavorful. However, a dough with more than 60% hydration gets difficult to handle, so if we’re making an 85% hydrated dough, we have to use a stand mixer for the flour to absorb all that water.

Pizza toppings are limited only by your imagination. Traditional toppings include tomatoes, either in sauce or whole slices, mozzarella cheese because it melts so beautifully, Italian meats like pepperoni, salami, sausage or ham, grated cheeses like Parmesan or Romano, vegetables like spinach, peppers, onions, mushrooms and, of course, garlic. Fish and shellfish make appearances on pizzas including shrimp, clams and anchovies. Some people put nuts on their pizzas like cashews, pine nuts or pistachios, and herbs like basil, oregano or marjoram. We sometimes add fresh arugula on top of our pizzas after they are cooked, making them a one dish meal with the salad on top.

Put the water in a medium sized mixing bowl and sprinkle the yeast on top. Stir gently and allow the yeast to dissolve and turn the water to a light beige color. Let stand 5 minutes.

Add the flour in 1 cup batches to the water/yeast mixture. Combine just until it forms a rough dough. Cover the mixture with a damp side towel and allow to stand 25 minutes. Stir in the salt and turn the dough out onto a lightly floured surface. Knead for 5 to 10 minutes until the dough is elastic and satiny. If you break off a small piece, see if you can stretch the dough out in what is known as a “baker’s window.” You should be able to stretch the dough to the point you can just see through it without it tearing. If it tears, knead a few more minutes.

Lightly oil a bowl or other suitable contained with olive oil. Turn the kneaded dough over so all sides are lightly coated with oil, cover and set aside to rise in a warm place (70 to 75 degrees) until at least double or more in bulk, I like triple.

Gently deflate the dough by turning its edges back over itself. Don’t over handle it. Quickly cut the dough into 6 to 7 oz balls, each ball will become a pizza. You can refrigerate or freeze them, tightly wrapped in plastic wrap, at this point. You can also let them proof further, but don’t let them over rise.

If you refrigerate the dough it will continue to ferment until ready to be used. Remove the dough from the refrigerator, knead it gently to deflate, and preheat your oven. Allow at least 30 minutes for the dough to return to room temperature, then form, top and bake at 450 degrees until done.

Pour water into a medium sized bowl and sprinkle the yeast on top. Gently stir to dissolve the yeast and allow to stand 5 minutes.

Add the flour to the water-yeast mixture to form a rough dough. Cover with a damp side towel and allow to stand for 25 minutes. Add the salt, pepper and lard and mix thoroughly. The dough should be soft and sticky, but come away from the side of the bowl.

Turn out onto a lightly floured surface and proceed to knead from 5 to 10 minutes, adding small amounts of flour as needed. The dough will become elastic and smooth. When properly kneaded, it will spring back when pressed down.

Place dough is an oiled bowl, cover with plastic wrap and allow to rise in a warm place until risen between double and triple its original volume. At this point, you can cut the dough into 6 to 7 oz balls and form them into pizzas, or you can refrigerate the dough for use later.

This will produce a excellent all purpose pizza dough. It is thick and chewy. If you want it thicker, allow to proof for 30 minutes once you’ve lined a pizza pan, but top it just before baking.
Posted by Horace Palmer, III at 7:12 AM