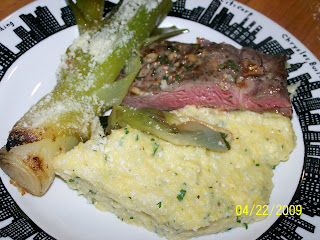 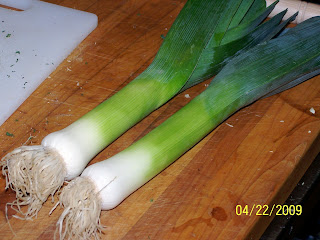 If you are not familiar with those large green and white scallion-like vegetables known as leeks, you are in for a treat if you’ll give them a try. A member of the Alliaceae family along with onions, scallions and garlic, their Latin name is allium ampeloprasum. The plant is composed of a large cylinder of bundled leaf sheaths that are blanched white by hilling dirt up around the plants as they grow. For this reason, leeks often contain sand or grit and need to be washed thoroughly. The plants are very hardy and can be harvested from mid-summer right up to a hard freeze, so they can be found at local farmers’ markets during the summer and fall months. Ramps are wild leeks that grow from the Carolinas north into New England and can be foraged for in the early spring.

Long a staple in French cooking, the leek was cultivated in the Middle East and pictures of leeks have been found in Egyptian tombs. In Rome, Nero was well known for his love of leeks, which he thought would help his singing voice. Romans probably introduced the leek to Britain where it became the special vegetable of Wales. Welshmen wore leeks on their helmets in battles with the Saxons to distinguish themselves from the enemy and the leek became the symbol of Wales and an integral part of their culture.

In culinary use, the whole plant is edible, but the root is cut off and the top of the creased green leaves can be coarse and taste more like cabbage than onion, so they are generally discarded or added to the stockpot. The white stem and pale green leaves have a mild sweet onion with hints of cucumber taste and a fresh smell. Smaller leeks are preferable over large, older leeks, which can have a solid, ligneous flower stem at their core, which is inedible and must be removed before using the rest of the plant.

Leeks can be eaten raw, sliced thin and added to salads, but more frequently they are cooked, as in leek and potato soup (Potage Parmentier), which becomes Vichyssoise when you add cream and serve it chilled, Cock-a-leekie soup, which includes chicken with leek, or braised leeks or leeks au gratin with ham. As the leek contains a lot of long-chain carbohydrates, they are slightly mucilaginous, making them particularly well suited to soups and stews as they add body to the broth.

When sauted in butter, the leeks’ leaves become crispy and the mild onion taste sweetens. When cooked in water, like in braised leeks, they become soft and their flavor is mild. You can also grill leeks, but you’ll want to par boil them first or they will burn before cooking all the way through.

I'm not posting a Potage Parmentier (leek & potato soup) recipe as they are easy to find in any good cookbook like Julie Child's Mastering the Art of French Cooking. Here's an Italian recipe we enjoy on occassion at our house.

Peel away any yellow or bruised layers of the leeks. Wash thoroughly. Cut the white part only into thin slices, discarding the green part. Place 4 tablespoons of butter into a large skillet, and saute the leeks over low heat until lightly browned. Crush the bouillon cube over the skillet and add the salt, pepper and milk; cook for 5 minutes over low heat.

In a separate skillet, cook the sole in the remaining butter over medium heat. When lightly brown, remove from the heat, and flake the fish into small slivers with a fork. Add the sole to the skillet with the leeks, add the cream and the cheese. Cook over low heat 3 minutes, stirring constantly with a wooden spoon.

Meanwhile, cook the spaghetti until al dente, drain and add to the leek mixture, tossing it well. Preheat the oven to 350 degrees.

Using aluminum foil, make a package in which to place the spaghetti & leek mixture. Seal thoroughly and cook in the oven for 10 minutes.

Pull away and yellow or withered leaves from the leeks. Cut away the roots from the bulbous end, but do not cut off the green tops. Cut each leek in half lengthwise and wash them thoroughly under cold running water, spreading them with your hands to be sure all the grit is washed away.

Put the leeks in a pan just broad enough and long enough so they can lie flat and straight. Add the butter, salt and enough water to just cover them. Put on a cover and turn the heat to medium-low. Cook gently until the thickest past of the leek feels tender when prodded with a fork, about 15 to 25 minutes depending on how large they are. Turn them from time to time while they are cooking.

When done, uncover the pan and turn the heat to high to cook off any remaining liquid. In the process, the leeks will become lightly brown. Just before turning off the heat, add the grated cheese, turning the leeks over in the butter-cheese mixture so they are thoroughly coated. Transfer to a warm platter and serve at once.