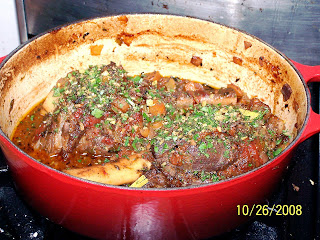 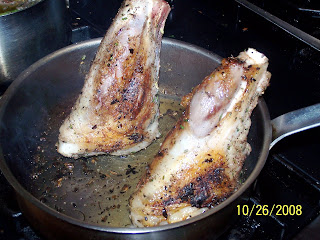 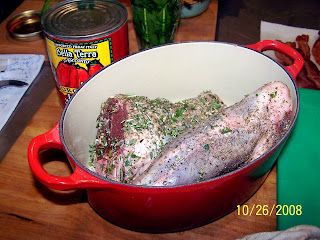 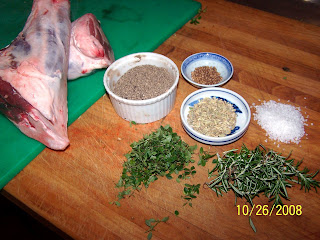 Now that the days are getting shorter and the weather is decidedly cooler, it is time for stewing and braising to create those hearty dishes we all love; beef stew, pot roast, coq au vin, chicken and dumplings, braised lamb shanks, osso bucco, short ribs and the like. However before we discuss any particular recipe, let’s review the principal technique of a braise as it is often mishandled, even by experienced cooks.

Braising is a moist heat cooking method as opposed to a dry heat method like broiling, grilling or sautéing. Braised, pot-roasted and stewed meats or vegetables are cooked in water, stock, milk, wine or pureed fruits or vegetables. These cooking liquids end up composing the sauce that is served with the braised item so they are usually fortified with aromatics like onions, carrots, celery and garlic, that are often the base upon with the braised item rests during the cooking process. These liquids have the advantage of being able to transmit heat evenly and rapidly, being easy for the cook to control, and of picking up and imparting flavor to the final sauce. While these liquids can not get hot enough to cause the Maillard reaction where meats brown thus deepening their flavor, braised meats can be pre-cooked in a small amount of fat to achieve a rich crust before they are finished in the cooking liquid.

One of the keys to a proper braise is the vessel one chooses to cook in. First it should be heavy with thick sides and a tight sealing lid. The best braisiers are made of cooper, enameled cast iron or cast iron. Originally these braising vessels had a concave lid that almost touched the meat being cooked. The cooking took place on the hearth with embers not only beneath and around the braisier, but also a few hot coals were placed on the top so heat came from all sides. Today’s modern cooking utensils don’t have concave lids, so any evaporating moist condenses on the lid and falls back into the sauce, diluting it. To prevent this from happening, place a piece of aluminum foil over the meat and snuggly against the sides of the pot and up over the edge. The pot’s lid can then be placed on top to double seal the contents. In this way you capture the steam that can otherwise condense on the lid, and you put the meat to be cooked under additional pressure.

It is important that during the braising process that the liquid surrounding the meat be kept at a relatively low temperature, about 180 degrees. Long and slow is the name of the game so that the collagen in the meat dissolves and its gelatin helps thicken the sauce. However, to be done, the meat needs to reach an internal temperature of 160 to 180 degrees, but this is above the temperature range of 140 to 150 degrees where muscle fiber loses its moisture. Those that have experienced dry and stringy pot roasts know what I’m talking about. To prevent this, after browning the meat, place it in the cooking liquid. Cover with aluminum foil and the lid and place in a cold oven with temperature set at 200 degrees. Allow the meat to rise in temperature to 120 degrees over a couple of hours, then raise the oven to 250 degrees and allow the meat temperature to rise to 180 degrees. Test every half hour until a fork or skewer inserted into the meat penetrates easily. At this point, the steam has pried the meat fibers apart, and some re-absorption of meat juices will occur while you allow the braise to cool in its liquid.

Preheat oven to 200°F. Heat oil in large ovenproof pot over medium-high heat. Add lamb and sauté until brown, turning with tongs, about 12 minutes; transfer to plate. Reduce heat to medium. Add capocollo and stir 1 minute. Add onion, carrots, and celery. Cover and cook until vegetables are soft, stirring occasionally, about 10 minutes. Mix in garlic; cook 1 minute. Mix in lemon peel strips, bay leaves, and thyme. Add wine and bring to boil, scraping up browned bits. Add tomatoes and broth. Return lamb to pot. Cover with aluminum foil as described above .
Cook lamb slowly for 1 1/2 hours. Check temperature of the lamb with an instant read thermometer. When the lamb reaches 125 degrees increase the oven to 250 degrees. Check the lamb in an hour and every thirty minutes thereafter until the lamb reaches 160 degrees.

Remove pot from oven. Tilt pot and spoon off fat that rises to top of sauce. Place pot over medium heat and boil uncovered until sauce reduces enough to coat spoon and lamb is very tender, about 30 minutes. Season to taste with salt and pepper. Discard lemon peel and bay leaves. (Can be made 1 day ahead. Cool 30 minutes, chill uncovered until cold, then cover and keep chilled. Re-warm over low heat before continuing.)