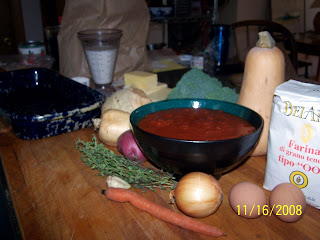 I wrote about home made spinach pasta, ragu Bolognese, and salsa bisciamella in the construction of a Lasagna Bolognese, a classic Italian dish, back in April (see www.boldosthoughtsonfood.blogspot.com). That’s a fairly complicated and time-consuming dish to prepare, although certainly worth the time, the expense and the effort. It’s a classic around the holidays, particularly if you have a buffet table with a variety of dishes.

Lasagna is both a type of noodle and a dish made by layering sheets of that wide pasta with any number of fillings in a casserole-type vessel, which vessel was originally the source of the name lasagna. Today the word lasagna means the dish itself, although in Italy it is called lasagne. Traditionally cheeses like mozzarella and ricotta are included in lasagna, and some Parmigiano-Reggiano is de rigueur. Unless making a classic dish however, lasagna lends itself only to one’s imagination as to what to include between, or on top, of the lasagna noodles.

While I make my own lasagna noodles, you can use store bought in the name of time. I’m not crazy about the no-cook lasagna noodles that are available, but we did use them at Balducci’s in New York when I worked there, and we sold a lot of lasagna. If you make your own, or buy some that require pre-cooking before layering with fillings, a few words on proper cooking and handling.

When cooked in rapidly boiling, salted water, the proteins and starch granules in the dough expand and absorb the water. The outer protein layer ruptures and starches are released into the cooking water, thus the water’s modest change in color. The outside of the noodle softens, but the inner starches aren’t disrupted as much. To cook a noodle al dente, where it is slightly under done at the center, and therefore with a slight resistance to the tooth when bitten into, the outside noodle is 80% or more water, but the center is about 50% water. For lasagna, we want to drain the noodle just before they are al dente and plunge it into cold water to arrest the cooking process. The noodle should be removed from the cold water in about 3 or 4 minutes, and allowed to drain on a kitchen or paper towel, if using immediately, or they can be lightly oiled if not used right away.

It is recommended that the amount of water used in cooking pasta should be 10 times or more of the weight of the pasta being cooked. Therefore, one pound of pasta would need 5 quarts of water and 6 quarts would be even better. The water should be brought to the boil and then salted at a rate of 1 ½ teaspoons per quart. The pasta should be placed in the rapidly boiling water right after the salt is added. With the addition of the pasta, the water will temporarily fall below the boiling point and your noodles will tend to stick together if you don’t stir them until the water returns to the boil. When the noodles, or any pasta, are in contact with other noodles, the dry surfaces will absorb a little water, but the surface starches will act like glue to the adjacent starchy surfaces while there is no room between them for lubrication, as a result, they stick together. Stirring the water until it returns to a boil and/or adding a couple of tablespoons of olive oil to the water to help lubricate the surfaces minimizes this problem. The salt in the water not only seasons the noodle, but assists in starch gelatinization and therefore reduces this stickiness.

Similarly, after cooking, as the surface of the noodle dries out, it can stick to its neighbor noodles. If you coat your noodles lightly with oil, you can prevent this from happening, and reserve those noodles for later use.

Homemade or store bought Lasagna noodles, cooked and refreshed in a bowl of cold water.

Make roux by melting the butter over medium heat and adding the flour. Combine and cook gently, stirring often, for 3 to 4 minutes. Scald the milk in a small saucepan by heating it slowly until bubbles appear around the edge of the pot, but the milk isn't boiling. Add scalded milk slowly to the roux, stirring. Bring to simmer and stir until thick, 3 to 5 minutes. Season with salt, pepper and grated nutmeg to taste. Add the cheddar cheese and stir until melted. Set aside until needed.

Place the butternut squash, potato, parsnip and celeriac on parchment paper lined half sheet pans and roast 15 minutes in a 425 degree oven until cooked through. Reserve

Make a Marinara sauce as follows:

Saute 1 large onion in 2 tbl. olive oil for 5 minutes. Add 1/4 cup finely diced carrot and 1 clove of minced garlic to the onion. Saute 3 minutes, add some fresh thyme leaves picked from their stems and 1 28 oz. can of whole tomatoes along with their juices. Bring to a rapid boil and cook 10 minutes. If the sauce is splattering out of the pot, reduce the heat a little. After 10 minutes or more, reduce the heat to a slow boil and cook until the sauce is thick, 20 minutes or more. Season with salt and pepper and add some fresh basil if it is in season. Reserve.

To assemble the lasagna, cover the bottom of your lasagna dish with a spoonful or two of the tomato sauce. Cover with a layer of lasagna noodles. Spread a thin layer of tomato sauce over the noodles and arrange slices of butternut squash on top. Add more tomato sauce over the squash. Sprinkle lightly with Parmigianno-Reggiano cheese. Add a second layer of lasagna noodles, spread these noodles with a thin layer of the cheddar bechamel. Top with the slices of roasted parsnip, potato and celeriac. Cover with cheddar bechamel sauce. Add a third layer of noodles. Sprinkle this layer with grated mozzarella cheese and cover with the rough chopped broccoli florettes. Sprinkle with more mozzarella and a light sprinkle of the Parmiagianno-Reggiano cheese. Top with a fourth layer of noodles. Cover the top layer with cheddar bechamel and a few dollops of tomato sauce and a sprinkling of the Parmiaggino cheese. Cover with aluminum foil, tented up a little so it doesn't rest on the top layer and bake at 425 degrees for 35 minutes. Remove the aluminum foil and return to the oven for 10-15 minutes until lightly browned on top. Allow the lasagna to cool for at least a half hour, and longer is better, before slicing, to allow the ingredients to set up, otherwise the lasagna may be runny on the plate.

Enjoy with a small salad and a glass of red wine.
Posted by Horace Palmer, III at 9:38 AM