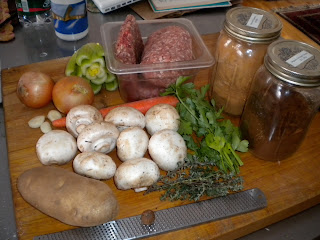 I had a few days off from work right after the New Year, so Rosemary and I visited Montreal and explored its many and varied food offerings.  Like most cities of any size, and Montreal’s population is 1.8 million, it has enclaves of ethnic immigrants from the Irish to the Italians, to the Muslims and Chinese, and others.

Montreal is known for its bagels, with which it carries on a friendly rivalry with New York city as to where the best ones are made, its poutine, French fries with cheese curds and gravy, it’s pate chinois, which we know as shepherd’s pie, and it’s tourtiere, French-Canadian meat pie which originated in Quebec, and is eaten in connection with the holidays, but also all winter long. 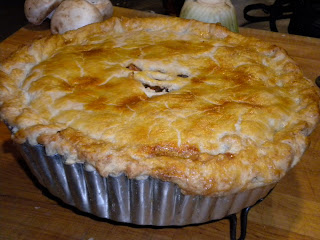 While I’m sure there are locations in Montreal where all these regional dishes are available, the bistros and Irish pubs we tried didn’t carry any of these offerings.  The closest we came was a chicken potpie and a steak and mushroom pie.  When I inquired of the concierge at the hotel about the local food, he indicated that most people made those dishes at home, So, I’m making a tourtiere at my house today.

The Quebecois meat pie is one of those dishes where every family has an “original” recipe, usually the one Grandma or Great Grandma used to make for Christmas or New Year’s Eve.   They can be as simple as some sauted onions and ground beef or pork, with some holiday spices like cinnamon, cloves and nutmeg, baked in a pie shell, or a more elaborate concoction with ground pork and/or veal added, potatoes, carrots, breadcrumbs, herbs and stock added.  Cognac is not unusual, as well as celery, garlic and parsley.  In coastal regions, fish is substituted for the meat used in the interior provinces.  It’s one of those dishes that invites the cook to be inventive and use up what might be found in the refrigerator or pantry. 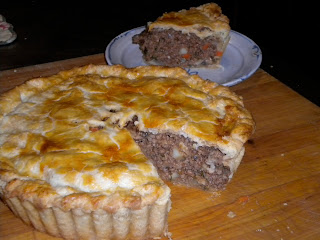 Most of my food reference books don’t make mention of tourtiere, but in Larousse Gastronomique the word is defined as the cooking vessel, “ a round mould…slightly wider at the top, with high fluted or smooth sides…”  Accordingly, I cooked my tourtiere in a 9” false bottom, fluted tart pan.

I also came upon a reference to the original tourtieres being made with passenger pigeons, which are now extinct.  And many other sources indicate a layer of mashed potatoes is sometimes included.

The one I made included equal amounts of ground beef and pork, some diced potatoes and carrots, sauted onions with garlic and chopped celery, sauted mushrooms, a couple of tablespoons of tomato paste, ground cloves, cinnamon, allspice, fresh thyme, fresh parsley, brown beef stock and bread crumbs.  First I sauted the onions, garlic, celery and meats until they were no longer pink.  Meanwhile, I blanched the diced potatoes and carrots before adding them to the meat and aromatics.  I added the spices and herbs, and the tomato paste, sauted it a couple more minutes before adding the stock, covering the pan and simmering 10 minutes.  I then stirred in the breadcrumbs and allowed the mixture to cool completely.

I made a butter and lard pie crust, lined my tart pan, filled with the meat mixture, covered with another piece of pie crust in which I cut a vent, and baked in the oven until done, about 30 minutes.  It was very tasty.

Put 2 Tablespoons olive oil in a large pot.  Add the ground meats and saute until they are no longer pink.  Add the onion, celery and mushrooms and saute for 5 minutes.  Meanwhile place the diced potato and carrot in a sauce pan covered with water.  Bring to the boil and let simmer 1 minute.  Drain well and add to the meat mixture.  Add the tomato paste and the spices and herbs.  Sauce 3 minutes and add the beef stock.  Cover the pot and simmer 10 minutes.  Remove the lid and cook down until still moist, but not too soupy.  Stir in the bread crumbs to thicken the mixture.

Meanwhile prepare a butter and lard pie dough and line a 9" false bottom tart pan.  Line with 2/3s of the pastry dough and fill with the meat mixture.  Cover with the balance of the pie dough, crimp the edges and cut a vent in the center.  Bake at 400 degrees for 30 minutes, or until the top is golden brown and delicious.  Remove from the oven and let cool for 20 minutes or more before removing from the tart pan.  Cut into slices to serve with a nice green salad.