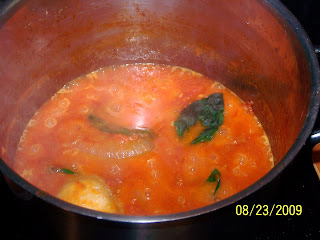 Since last week, the late blight has ravaged our tomato crop so bad that we’re destroying all our plants except a few cherry tomatoes, mostly Sun Gold, which still seem to be doing OK. We’ve enjoyed the shortened harvest, and some fruits are still ripening on our porch, but for the most part a very promising crop has been laid low as so many of our neighbors’ crops have also.

Fortunately, many area farmers cultivate a large part of their plants in hoop or green houses, and these enclosed environments are better able to keep the late blight spores from infecting their crops. There were many heirloom varieties available at the farmers’ market his past weekend, and they should continue to be available for a number of more weeks. So stock up if you’ve had blight problems so you can enjoy some local products this winter when all you’ll see are California or Florida tomatoes in the store.

While China is the largest grower of tomatoes, the US is second in worldwide production, with California growing over 90% of the processed tomatoes, meaning plum or sauce tomatoes, which are available canned year round.

Some tomatoes are determinate, meaning they grow to a specific height and set their fruits, most of which ripen at or about the same time. Indeterminate tomatoes continue to grow until either frost kills them, or the gardener cuts off their top. Indeterminate varieties have their fruits ripen as they grow, so they can produce a continuous crop over a long period of time. At Longwind Farm in East Thetford, David Chapman fills his greenhouses with a single planting, which bears fruit from early March through the middle of November. 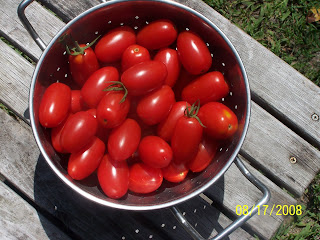 Tomatoes are considered a vegetable, a term that is culinary in nature and has no scientific meaning. Botanically tomatoes are a fruit, however they don’t share the common characteristic of most fruits, sweetness, and they are not used in desserts, where most fruits appear in a meal. Rather, the tomato is typically served as part of a salad at the beginning of a repast, or they are included in the main meal itself.

While the tomato is naturally acidic, and this makes it any easy plant to can for home gardeners as a hot water bath is all that needed, not a pressure canner, it was the suspected source of a major salmonella outbreak a couple of years ago. While the FDA and the USDA were never able to pinpoint the source of the contamination, Mexico was a suspect, although Serrano and jalapeno peppers were also identified as a possible source of the infection.

Tomatoes contain lycopene, a powerful anti-oxidant that has cancer preventing properties. It has been positively identified as beneficial in preventing colorectal, breast, endometrial, lung and pancreatic cancers. In fact, organic ketchup is found to have much more lycopene than non-organic ketchups, so a word to the wise the next time you need this condiment.

In addition, tomatoes have been shown to provide benefits in preventing heart disease, and lowering cholesterol profiles. They are a great source of Vitamins C, A and K as well as manganese and potassium and they are low in calories.

So enjoy the local vine ripened harvest while it’s still available, and put some up for winter if you can. They’re delicious right now!
Posted by Horace Palmer, III at 3:06 PM

Especially enjoyed the history of the tomato. And the zucchini on the grill--so much so that I put it on mah own blog, sir. (With a link to you).

I'se in Florida, so we grow tomatoes in the garden year round. But I'se interested in tryin' yore
Green Zebras.