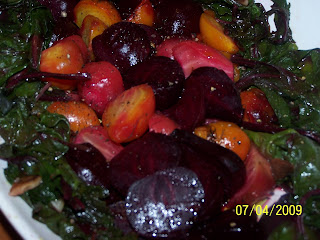 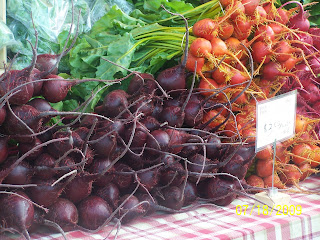 Over the past few weeks I’ve had the pleasure of shopping at farmers’ markets in Bradford, St. Johnsbury, Montpelier and Norwich. The quality and variety of the produce, proteins like chicken, pork, beef and elk, maple and honey products, cheeses, crafts, and prepared foods is wonderful to behold. It’s time to eat the season and enjoy our local bounty brought to us by dedicated stewards of the land who honor their husbandry traditions.

We have been enjoying some fabulous beets, both red and golden, from Your Farm in Fairlee (www.yourfarmonline.com). They grow three varieties, a traditional red beet, a golden one, and Chioggia or candy-strip beet.

The garden beet is a member of the beetroot family, Beta Vulgaris, which includes other vegetables like chard and spinach beet, grown for their leaves and midriffs, sugar beet, a tuber from which sucrose is derived, and mangle-wurzel, a tuber grown as a fodder crop.

Beets have been cultivated for thousands of years, at least since the second millennium BC, and were probably domesticated around the Mediterranean before spreading through Babylonia to China in 850 BC. Originally the beetroot was a long taper, similar to a carrot, and the plant was grown for its leafy greens. The Vuglaris variety with its red, fleshy tubers became popular after the rise of spinach supplanted the beet green as the cooking green of choice. My Larousse Gastronomique claims that some “long-rooted varieties…have more flavour and are sweeter than round varieties…” but I’ve never seem any beets like that around here.

Beets have a lot of health benefits from their consumption and have a long tradition in folk medicine. They have been used as a laxative to treat constipation, as an aphrodisiac, for illnesses related to digestion and the blood. It’s high in antioxidants, boron and oxalic acid, and has been used in cancer treatments, mostly in Europe. Drinking beet juice lowers blood pressure and the pigment molecule betanin seems to provide protective benefits against cancer.

Beets can be cooked in boiling water, roasted in the oven, or grated and eaten raw in salads. I like to roast my beets, unpeeled, with about an inch or so of the beet top still attached. I put them on a sheet of aluminum foil with a couple cloves of crushed garlic, a spring of thyme, a swirl of olive oil, and a sprinkling of salt and pepper. Wrap them up and put in a hot (400-425 degrees) oven for 45 minutes or so, depending on the size of the beets. When a fork pierces them easily, remove and allow to cool somewhat. When you can handle them, peel them and go on with your recipe. Roasting concentrates their flavour more than merely boiling, and I’ve seen older recipes which recommended placing boiled beets in the oven for an hour or more to accomplish the same effect.

Pickled beets are popular with many as a condiment, and borscht is a rightly famous cold soup, indigenous to Eastern Europe.

Here's a recipe for pickled beets that takes a couple of days, but is well worth it. Try it and enjoy.

Bring all ingredients except beets to a boil in a 2- to 3-quart saucepan, stirring until sugar is dissolved. Cover and simmer 30 minutes.

Cool marinade, then chill, covered, 1 day to allow flavors to develop. Pour through a fine sieve into a bowl.

Cook beets in a saucepan of boiling salted water until tender, 1 to 1 1/4 hours. Drain and cool. Slip off skins and cut into 1/2-inch pieces.

Stir together beets and marinade, then marinate, covered and chilled, 1 day.

Make almond butter:
Grind almonds to a paste with garlic, 1/4 teaspoon salt, and cayenne in a food processor. With motor running, add just enough oil to make a silky paste. Season with salt.

Make beet salad:
Simmer beets in 3 inches of water in a large saucepan, covered, until tender, about 30 minutes. Cool in liquid, uncovered, about 30 minutes, then peel and cut into 1/2-inch wedges.

Whisk together vinegar and 1/2 teaspoon salt in a bowl, then whisk in oil. Add shallot and chives and toss with beets.

Divide almond butter among 6 plates and top with beet salad. Put a bombolone on each salad and sprinkle lightly with sea salt. Serve remaining bomboloni on the side.

Stir together yeast and milk in bowl of mixer and let stand until foamy, about 5 minutes. (If mixture doesn't foam, start over with new yeast.) Mix in 3/4 cup flour. Cover bowl with plastic wrap and a kitchen towel and let dough rise in a draft-free place at warm room temperature until doubled and bubbly, about 1 hour.

Mix in egg, butter, sugar, salt, and remaining 1/2 cup flour at low speed until combined. Increase speed to medium and beat dough until satiny and elastic, 5 to 7 minutes. Scrape dough into center of bowl and dust lightly with flour. Cover bowl with plastic wrap and a kitchen towel and let dough rise at warm room temperature until doubled, about 1 hour.

Line a baking sheet with wax paper and lightly sprinkle with flour. Punch down dough and turn out onto a lightly floured surface. Cut into 16 equal pieces. With lightly floured hands, flatten 1 piece of dough and put a cheese cube in center. Pinch closed, then roll into a ball and transfer to baking sheet. Make 15 more balls, arranging 1 inch apart.

Heat 2 inches oil in a 2-quart heavy saucepan over medium heat to 350°F. Fry bomboloni, 4 at a time, turning frequently, until puffed and golden, about 2 minutes per batch. Transfer with a slotted spoon to paper towels to drain. Return oil to 350°F between batches. Serve hot.