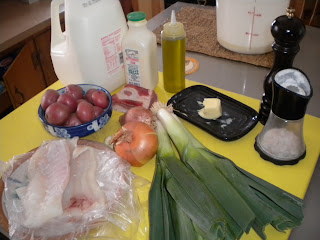 We had a wonderful piece of cod from the Holy Mackerel fish store in Fairlee the other night, but the whole fillet was more than we could eat in one meal.  I dutifully removed the thickest pieces for dinner and reserved the balance to make a fish chowder the next day.
Chowder is a New England tradition, although we can’t lay exclusive claim to it, as its origins were probably European, given that the word “chowder” is a derivation of the word chaudiere, an iron pot French settlers brought to New England and the Maritime provinces of Canada.  Upon arriving in the new world, the settlers soon met the local Micmac Indians, one of whose main sources of protein was the local clams, which were ubiquitous.  With an appropriate cooking vessel and an abundance of clams, the origins of chowder were set, and logically onions and potatoes were soon added to the pot, and milk followed shortly thereafter. 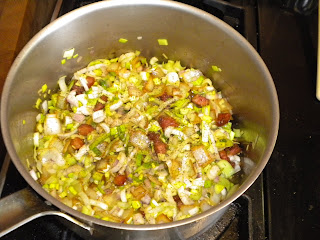 While one can concoct a chowder from any variety of fish, shellfish, or vegetables, usually the only meat would be some sort of cured pork, like bacon or salt pork, although ham hocks or even minced ham is are sometimes used.  In New England it is traditional to include sautéed salt pork, onions, diced potatoes, thyme, bay leaf, hard shell clams (be they quahogs, cherrystones or little necks) and milk and/or cream, with a parsley garnish.  I don’t advocate the use of flour to thicken the chowder, although a lot of places make a roux as part of the chowder-making process and produce a chowder that is so thick it’ll hold a spoon upright.  In my recipe, the broth is thickened by the starch given off by the boiling of the potatoes, and the addition of crushed saltines, or Vermont hard crackers, when the soup is served. 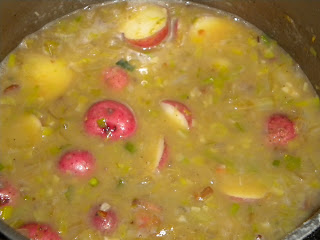 As one proceeds south from Boston, however, the chowder starts to change.  In Rhode Island they don’t add milk or cream, but they do add some tomatoes (part of their Portuguese culinary tradition), thus they have a reddish clear broth.  Further south in New York, Manhattan clam chowder includes not only tomatoes, but also herbs and no milk.  To New Englanders, this concoction “is only a vegetable soup, and not to be confused with New England Clam Chowder, nor spoken of in the same breath.” 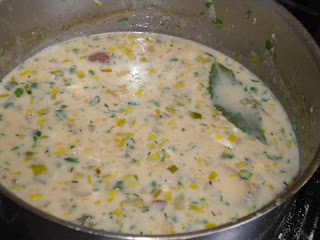 One can make their chowder with their clams either in their shell or not.  If you are using large hard shell clams like quahogs or cherrystones, it is probably best to steam them in their shells and, after the shells open, remove the clams and chop them up before adding to the chowder, along with their juices.  If using little necks or count necks, they can be steamed open right in the chowder and make an attractive presentation in a large soup bowl. 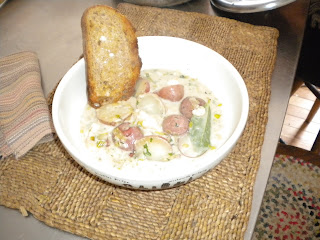 Chowder doesn’t have to include clams, as there are fish chowders, corn chowder and vegetarian chowders, with the latter often featuring beans and/or corn.  In the summer, fresh corn and Maine lobsters make a fantastic chowder, and a recipe is posted on the blog under the corn articles from last summer.

Three Onion Fish Chowder
Serves 4
3/4 lb fresh cod, cut into 1' pieces
6 oz. salt pork, cubed
1 onion, chopped
1 leek, washed and cut into rounds
1 shallot, chopped fine
1 Tbl olive or canola oil
3/4 lb red Bliss potatoes, cut in half if small. cubed in larger
1 sprig fresh thyme
2 bay leaves
1 cup milk
1/4 cup heavy cream
Freshly ground black pepper
2 Tbl minced parsley
Vermont crackers or saltines
Saute the salt pork in the oil until crisp.  Add the chopped onion, leek and shallot and saute 5 minutes until soft, but not colored.  Add the potatoes and stir them around in the fat before just covering with water.  Bring to a boil and cook, uncovered, for 10 minutes, or until the potatoes are cooked through.  Add the fish cubes and cook gently for 5 minutes.  Add the milk and cream and bring back just to the simmer.  Remove from the heat and garnish with the parsley.  Give each serving a sprinkling of the black pepper.  Serve with the crackers.
Posted by Horace Palmer, III at 6:47 AM