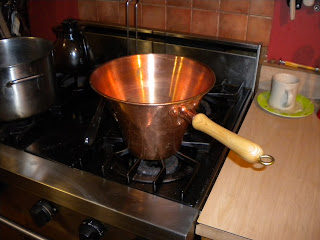 While I’m not a huge fan of the corn industry due to it’s inordinate influence on the American diet, there is one corn dish that we have made for years and recommend to others.  When I was a child, it was known as corn meal mush, but today it is more commonly known as polenta.  It is a food borne of poverty, but today it appears on menus of some of the finest restaurants not only in America, but worldwide.

Polenta is indigenous of northern Italy where it was originally made with either barley, farro, or chestnut flour.  As it was the sustenance for life in many economically depressed areas of Italy, “preparing it was a ritual, and eating it was like receiving the sacrament,” as Marcella Hazan states in The Essentials of Italian Cooking.

Corn meal can be fine or coarse in its grind.  I prefer to use the coarser grained corn meal as it produces a somewhat more robust, corny flavor than the fine grind.  It becomes creamy as it cooks due to the gelatinization of its starch during the cooking process. 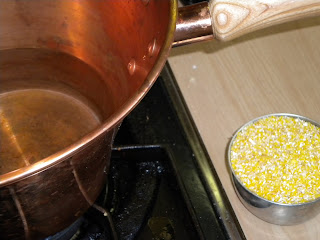 It is traditionally made in an unlined cooper pot known as a paiolo, although any heavy bottomed saucepan will work just as well.  Whatever quantity of corn meal you wish to cook, add 4 times that amount of water to your cooking vessel.  Bring the water to the boil, add salt to taste, and while stirring the boiling water into a vortex, slowly either pour the corn meal into the water or add by handfuls, allowing the grains to slip between the fingers.  If added too fast, the corn meal may lump up, producing an unsatisfactory result.  Once all the corn meal has been added, stir the mixture with a wooden spoon until the water returns to the boil.

As regular polenta requires 45 minutes or an hour of slow cooking, it was always stirred constantly to prevent it from scorching on the bottom.  Today we know that if one covers the pot and keeps it on low heat, you can stir every ten minutes or so, freeing the cook to prepare accompanying items for the meal.  Instant polenta has been developed which reduces the cooking time to less than 10 minutes, but, being a traditionalist and devotee of the Slow Food movement, I always use the long cooking variety. 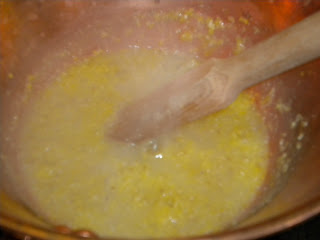 Once the polenta starts to pull away from the edge of the pan and/or the spoon will stand up in the polenta, it is done. 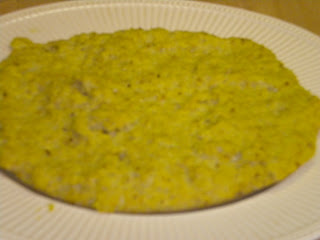 
At this stage, one can either add parmesan cheese and a dollop of butter to the polenta before serving, stir in some softened gorgonzola cheese, or allow it to cool, usually after having poured it out onto a large surface, like a cutting board.  If served warm, it can be eaten alone, or sauced with the juices from the meat or vegetable course.  If allowed to cool, it stiffens up and can be cut into triangles, diamonds, or batons which are either sauted in oil until crispy, grilled or baked.  When sauted, we usually eat it with an accompaniment of sauted greens like spinach or Swiss chard, mushroom ragout, or any meat or vegetable side.  It’s fun and delicious.