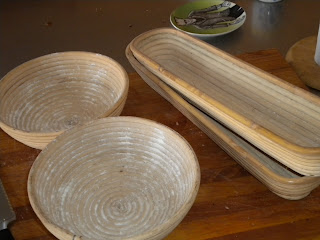 Over the past couple of weeks, we’ve examined bread flours, yeast, pre-ferments, and mixing of bread dough.  Now its time to understand fermenting the dough, retarding the dough, shaping the loaves, proofing and baking the final product.

If you’ve made traditional white bread in a loaf pan, the “fermenting” part of bread baking is what you know as the first rise.  During this time, the yeast in the dough is feeding on the sugars in the flour, producing carbon dioxide, alcohol and acids.  These chemical reactions contribute the bread’s flavor and aroma.  The carbon dioxide becomes trapped by the gluten network we created through kneading, and the bread rises.

Bacteria in the dough consume maltose, a sugar that yeast can’t digest, producing lactic and acetic acids, which provide a tangy flavor to the bread.  However fermenting bacteria won’t contribute significantly to the bread’s flavor unless it has at least eight hours of fermentation, so to receive the full benefit, one must retard the bread, by refrigerating it for a period of time.  Retarding can be done after the initial fermentation or after the loaves have been formed.

While most bread recipes call for an initial rise to double the dough’s original bulk, I prefer to allow the dough to rise to triple its original bulk.  During this rise, I “turn” the dough once or twice.  In turning the dough, I gently lift it and fold the drooping sides into the center of the bowl, redistributing the yeast and its food supply, evening out the dough’s temperature and reinvigorating the yeast.  The gluten is strengthened by this action, and most of the air cells remain trapped in the dough.

Once the dough is fully risen, its time to divide the dough into to pieces that you will later shape into the loaves to be baked.  Most of the breads I make do not use a bread pan, but are free-standing loaves, either shaped like a football with tapered ends or round loaves.   I do have some willow bread baskets that I use to proof my round loaves, and these leave distinctive coiled markings on the outside of the loaves when they are baked.  Other loaves I allow to proof on a couche, a piece of floured canvas used in professional bakeries, and which can, within its folds, hold several loaves.

The divided dough is allowed to rest for about 10 minutes to relax the gluten, which makes forming the loaves easier.  Shaping the loaves is an art form that varies from bakery to bakery.  Depending on the bread, shaping can be easy or very complex, but suffice it to say that one of the main objectives is to create a surface tension on the outside layer of the dough. 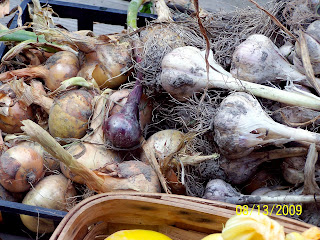 Once shaped, the loaves need to proof, or rise again before being baked.  Usually they rise to close to double their original size before being placed in the oven to cook.

I use a baking stone in my oven on which I place my proofed loaves to bake.  I also score or slash my loaves with a razor blade to control the “oven spring,” that final rise that occurs in the oven before the heat kills the yeast.  By scoring the loaves, one weakens the surface tension is those areas the razor cuts, and this tends to control where the dough expands during these first few minutes of baking.

Lastly, I spray my loaves during the first 10 minutes of baking with water from a spritzer.  Wetting the surface facilitates heat transfer to the loaves from the oven while also keeping the exterior flexible to maximize oven spring.  The result is a higher, lighter loaf with a crackling crust. 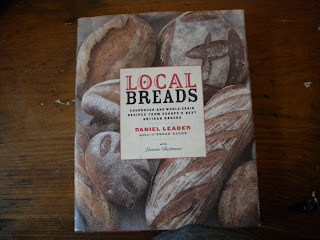 A day before you plan on baking, pour the water into a large bowl, add the yeast and flour and mix a stiff dough.  Turn out and knead a couple of minutes, round the dough, place it in an lightly oiled container, allow to sit at room temperature for an hour or so, then refrigerate until the next morning, removing the biga from the refrigerator an hour before you plan on mixing the rest of the dough.

Scrape the biga into a large bowl and pour the water over it, stirring to break the biga  up.  Stir in the yeast, flour and salt until a dough forms.  You can add just the water and flour and allow to rest for 25 minutes before adding the yeast and salt, if you wish.

Either knead the dough by hand for 10 to 15 minutes.  The dough will be sticky, so use some extra flour, but not too much.  If you use a stand mixer, knead with the dough hook on medium speed for 10 to 12 minutes until the dough is elastic and smooth.  To check that the dough is properly kneaded, tear off a small piece and stretch it into a "bakers' window" until it thin enough that you can see through it.  If it tears, continue to knead a few more minutes.

Transfer the dough to an oiled container, cover and allow the dough to double (or triple) in volume.  It will be very light and airy.  This can take 2 to 2 1/2 hours.  You can retard the dough at this point by placing it in the refrigerator.  You will need to turn it or deflate before refrigerating, and you may need to do so a second time in a few hours.  If not retarding, or after retarding, divide the dough into two pieces and allow to rest on a floured surface for 10 minutes before shaping.

Shape the dough into rounds, pulling across your board to stretch the outer surface of the dough taunt.  I place my rounded dough into floured willow baskets to rise, but they can also be placed on parchment paper and covered with plastic wrap to proof.

Preheat the oven to 500 degrees and place a baking stone on the second rack to preheat.  This can take up to an hour.  Place a cast iron skillet on the rack below the baking stone.

When the loaves are proofed, either slide the parchment paper onto the baking stone or onto a sheet pan in the oven.  If using baskets, the loaves can be turned onto the baking stone next to each other.  Place ice cubes in the cast iron skillet and quickly close the oven door.  Bake until the crust is glossy red-brown, 30 minutes or so.  Cool completely on bread racks before slicing.