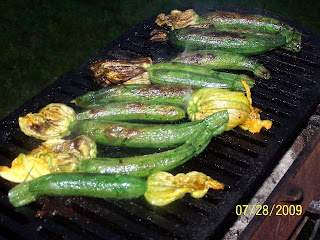 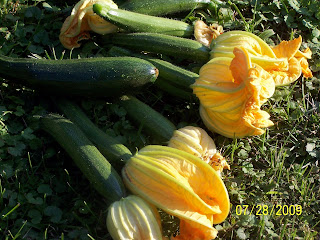 The wet weather doesn’t seem to have hurt our zucchini crop as it is starting to produce some fine little specimens, many with their bright yellow flowers still attached. Growing zucchini, which almost all home gardeners do, is not difficult, however keeping after the budding fruit is an almost daily chore. You know what happens when you’re away on vacation for week in August…ZONKERS up to three feet long take over your zucchini plant, and they’re no good for anything except the compost heap.

While most squash plants are American in origin, the zucchini, also know in many parts of the world as courgette, seems to have been developed near Milan, Italy, where the Italians cook them in an infinite variety of ways. The plant was brought to America by Italian immigrants and has been readily accepted in the American market. It is a member of the Cucurbita pepo family and closely related to our yellow crooked neck summer squash, which is can be substituted in any zucchini recipe. The Italian word for squash is zucca, so the feminine diminutive zucchine is used in some areas of Italy, however the male diminutive zucchini is most commonly used.

Zucchini, which is actually the fruit of the plant, being the female ovary, needs to be harvested while it is immature. As the fruit grows, so too do its seeds, which become unappetizing as they get larger. The flesh of an overgrown zucchini can become fibrous, making these large marrows undesirable. So pick them when they are small with the flowers still attached. They will range in color from a light green to a luxurious, deep green color, their skin will be taunt and firm and the flesh white with a few immature seeds. While zucchini are available year round, they are best when locally grown when their flavor is at its height. If purchased in the market, they should be glossy and free from blemishes. Any with dark spots or bruised flesh should be avoided.

Zucchini are low in calories and contain beneficial amounts of Vitamin A, folate, potassium and manganese.

When it comes to cooking zucchini, let us count the ways. They are grilled, steamed, sautéd, deep fried, baked, stuffed, steamed, made into a risotto or included in a frittata, or with pasta, or grated, or included in a ratatouille, or a soup…the list goes on and on. They are frequently sliced into rounds or ovals, but can also be cut lengthwise into quarters or matchsticks, depending on the application. They are most commonly eaten with the skin on, so they should be carefully washed before using, especially when purchased in the supermarket.

We particularly enjoy the zucchini flowers. If you pick the male flowers, those that grow on a long stem, you can deep fry them in fritter batter, or stuff them with mozzarella and anchovy and bake them in the oven. They make a distinctive presentation and an interesting side dish.

Place the flour in a small bowl. Slowly mix in the water until you have a smooth batter, slightly thicker than cream.

Heat deep frying oil in a cast iron skillet, not allowing the oil to exceed 1/2 way up the side of the pan. Using a deep fry thermometer, heat the oil to 375 degrees. Dredge the zucchini flowers in the pastella and slip into the hot oil. Fry a minute or two and turn the flowers over with thongs. Allow to cook on the other side a couple of minutes. Remove to paper towels to allow to thoroughtly drain. Immediately sprinkle with sea salt and serve while hot.