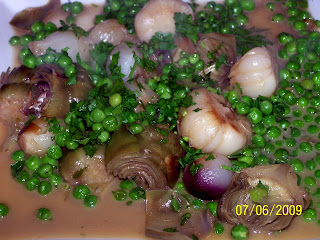 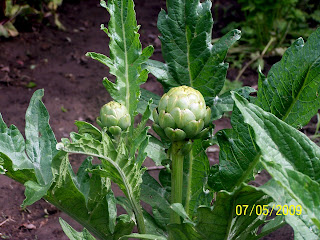 Artichokes are not usually thought of as a New England vegetable as California, due to its temperate climate, is the largest producer of these plants, which are related to the thistle family. However, more and more vegetable farms in Vermont and New Hampshire are producing these tasty little globes, which consist of the flower of the artichoke plant picked before it ripens.

The Globe Artichoke, a member of the Cynara cardunculus family, is a perennial thistle, which came from the Mediterranean area, although it is not clear if it developed in Northern Africa or Sicily first. It is also a biennial plant, which is now grown as an annual by northern growers as it is not frost tolerant, and must be replanted each year. Northern growers trick the plant into thinking it is in its second season by subjecting the young plants to a period of cold temperatures when they are about 6 weeks old. First year plants only make leaves, but when convinced it is in its second season, the plant puts forth its buds.

Artichokes do require a little work to prepare for eating. I usually cut off about 1/3 of the top of the artichoke, removing the thorns that emanate from the leaves. You have to rub the cut surfaces with lemon to prevent discoloration of the leaves, which will quickly oxidize and turn brown if not treated. When preparing a bunch of artichokes, I acidulate a bowl of water with lemon juice and place each prepared artichoke in the water while I’m prepping the rest.

I remove the outer leaves of the choke until I reach the light green inner leaves. If one chooses to, one can take only the first row of outer leaves off and then simmer the entire choke in salted water until tender. Break off each leaf, known as a bract, dip in melted butter, vinaigrette, aioli or mayonnaise and gnaw off the edible base of the leaf. When all the leaves have been eaten, remove the hairy choke, and the base and upper stem of the artichoke are delicious.

Artichoke hearts are used as the base for other vegetable preparations, and constitute a part of the Arabic diet, which favors stuffed vegetables. Filled with baby peas and onions in a light cream sauce they make an appealing side dish to most any meal.

In Italy, where you see them growing in many yards, the artichoke is deep fried to produce the golden Carciofi alla Romano, a dish we make at our house, and in France they are prepared in an infinite variety of ways including Stuffed Artichokes, where they are par cooked, then stuffed with sausage, onion and parsley, wrapped in bacon, and braised in white wine and veal stock with onions and carrots.

Artichoke hearts, sold prepared in grocery stores, are often added to salads or can top a pizza. They make a tea from artichokes in Viet Nam, and it Italy the liqueur Cynar is primarily flavored with artichoke.

So take a little culinary adventure, pick up a few artichokes from the farmers’ market or farm stand and try some Mediterranean cuisine with locally grown artichokes. They’re fun!

The pictures above include artichokes growing in our garden in Fairlee, Vermont, as well as a seasonal dish we concocted on the evening we harvested 3 artichokes. Here's the recipe.

The small local artichokes we used did not have a developed choke, so we trimmed off the top of each artichoke, rubbing the cut surfaces with lemon juice, and removed the outer leaves until we reached the yellow-green inner leaves. We peeled the outside of the artichoke heart and stem, and placed the prepped artichokes in a bath of acidulated water to prevent browning.

We prepped the green garlic by removing its light husk and trimming the root end, leaving the heads whole. The green onions were trimmed to just their bulbs.

We sauted the green onions and green garlic in 1 tablespoon of butter for a couple of minutes before adding the artichokes, which we bisected through the stem, and the chicken stock. After simmering for 3 minutes we added the shelled peas, and allowed to simmer 3 minutes. We raised the heat to high to cook off some of the stock, hit it with another pat of butter, and the minced herbs. Season with a little salt and pepper. Delicious.