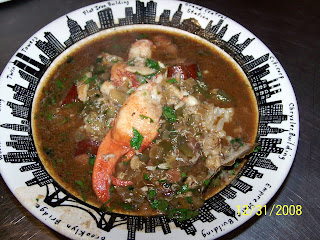 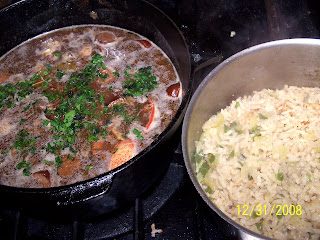 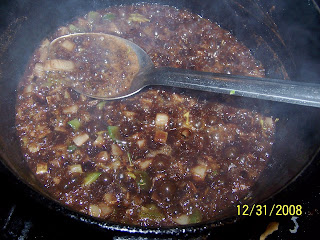 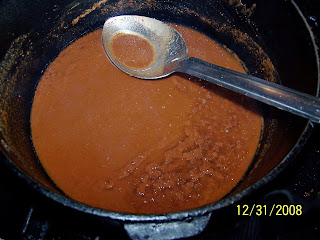 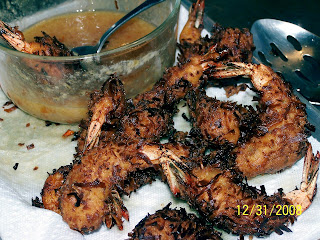 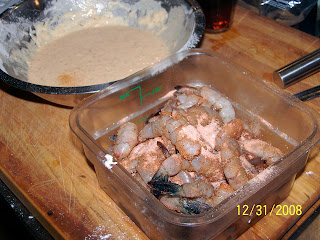 Next Wednesday will be New Year’s Eve and we’ll all be anticipating the arrival of 2009, a new President shortly thereafter, and a new beginning for each of us as individuals and the country. It’s a watershed moment for change, and we celebrate it at our house with an evening of fellowship and food, when we again depart from tradition and honor our national non-cuisine by indulging in a couple of Cajun dishes, a seafood gumbo and a deep fried shrimp dish with an unusual twist.

America is a land of many cuisines, most regional in nature and usually rooted in our immigrant customs that have been adapted to our locally available foods. The Cajuns are an immigrant peoples whose origin was France. Originally these Frenchmen settled in Nova Scotia, where they were known as Acadians. They, however, were driven off their land in 1755, with some returning to France, but others ultimately finding the French colony in Louisiana, where they were welcomed and granted land by the Spanish. The Cajuns are distinct from the Creoles, whose origin is Africa, although their cooking uses many of the same ingredients, most of which are indigenous to bayou regions of the Louisiana delta.

Perhaps the best know Louisiana chef in Paul Prudhomme (no slight intended to Emeril Lagasse) who showcased Cajun and Creole cooking at his K-Paul’s Louisiana Kitchen restaurant in New Orleans. His most famous dish is blackened redfish, which has been replicated using every imaginable protein available by other chefs across the country. His cookbook, published in 1984, Chef Paul Pudhomme’s Louisiana Kitchen, is a compendium of Cajun and Creole cooking, and I have enjoyed adopting recipes from that work using local ingredients. One note of caution; if you have or use his book, his spice mixes, now available for purchase in stores, can be mighty HOT!, so I go easy on the cayenne, as you can always add more if you love the heat.

Gumbo is a spicy soup/stew made with a strong stock, meat or seafood/shellfish, a thickener and the “holy trinity” of onion, celery and green pepper. The basis of all gumbos is the roux, a mixture of roughly equal parts fat and flour cooked until nearly burnt which imparts a deep smoky flavor and rich color to the stew. The Cajuns make a different colored roux for different applications, however for gumbo the choices are dark red-brown roux, or the preferred, black roux, which is more difficult to achieve. I’ll detail the roux making process with the recipe, but a big word of caution is called for as a Cajun roux is the equivalent of napalm if you splash it on yourself, so use a deep cast iron skillet or Dutch oven and long handled wooden spoons or whisks during the cooking process. The fat is heated to almost smoking (500 degrees) and the flour, which has moisture in it, is added in thirds, whisking all the time, or you risk having the fat boil over, possibly igniting and causing a fire. This Cajun cooking isn’t for the untried or the timid, however if you can master this technique, you will be rewarded with some interesting and delicious food.

Thoroughly combine the seasoning mix in a small bowl and set aside.
Combine 2 tsp of the seasoning mix with the 2 eggs and beat until smooth. Add 1 ¼ cup of the flour, the beer and baking powder. Mix well and break up any lumps.
In a small bowl, combine the remaining ½ cup of flour with 1 ½ tsp of the seasoning mix. Set aside. Place the coconut in a separate bowl.
Sprinkle both sides of the peeled shrimp with the rest of the seasoning mix. Heat the frying oil in a large pot to 350 degrees.
When the oil is hot, dip each shrimp holding onto its tail into the flour mix, shaking off any excess, then into the beer batter, allowing the excess to drip off, before rolling in the coconut. Cook in small batches until cooked through (30 seconds to 2 minutes depending on the size of the shrimp you use). The batter should be cooked through and the shrimp not overcooked. Serve immediately with Sweet & Tangy Dipping Sauce.

Combine all the ingredients and mix well.

Cajun Seafood Gumbo with Andouille Smoked Sausage
Serves 5 as a main dish, 10 as an appetizer

Make the seafood stock and prepare the rice for cooking.

Combine the onions, green peppers and celery in a bowl and reserve.

Heat the oil for the roux is a large, heavy cast iron skillet or Dutch oven over high heat, until it begins to smoke, about 5 minutes. Gradually add the flour, whisking constantly with a long handled metal whisk. Continue cooking, whisking all the time, until the roux is a dark, red-brown to black, about 2 to 4 minutes, being very careful to not let it scorch or to splash any on your skin. Immediately add half the trinity vegetables. Cook 1 minute, stirring, and add the rest of the vegetables. Cook another minute or so, stirring, and add the seasoning mix. Stir cooking 2 minutes, add the garlic, cook one more minute and remove from the heat.

Place the stock in a Dutch oven and bring to the boil. Add the roux mixture by spoonfuls, stirring until dissolved before adding more. Bring back to the boil after the last addition of roux and add the sausage, cooking 10 minutes at a simmer. Add the lobster meat, oysters and their liquor and the crabmeat. Return to the boil, stirring occasionally, before removing from the heat, skimming any oil from the surface. Serve immediately with a ¼ cup cooked rice placed in the center of a soup dish, with 1 cup of the gumbo ladled over, being sure to include some of each of the different sea foods and sausage in each plate.

To increase the flavor of the stock, consider roasting the ingredients in a hot oven until caramelized. Place ingredients in the cold water and bring to a boil, skimming any scum that rises to the surface. Simmer from 30 minutes to 4 hours, depending on how much time you have, but the longer the better. If simmering for a long time, replace some of the evaporated water on occasion so that you end up with a quart or slightly more when done. Strain the stock, degrease if needed, cool and store in the refrigerator until ready to use. Can also be frozen in ice cube trays for future use.

In a mini loaf pan, combine all the ingredients, mix well, and seal well with aluminum foil. Place in 350 degree oven and bake until tender, about 1 hour or so. Serve immediately, however, it will remain hot 45 minutes or so. If done ahead, reheat in a skillet with a pat of butter before serving.
Posted by Horace Palmer, III at 12:42 PM